Paula, an Arizona Oddities reader, recently inquired about the history and creation of Roosevelt Dam. While that’s quite a long story with several sides, we’ve done our best to summarize a few key points in a short blog post.

Whenever I have questions like this about Arizona history, I go to Arizona Oddities contributor and all-around-AZ-expert Marshall Trimble. I asked him for the story behind Roosevelt Dam, and this is what he told me: 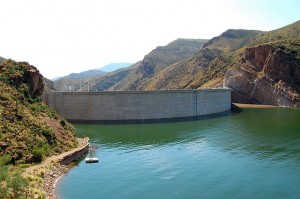 Roosevelt Dam was the first major Reclamation Project in the West and was probably the most significant event in the entire history of the Salt River Valley because it provided a reservoir of life-giving water that would make it possible for people to live here. Up until then, the settlers would have to leave during times of drought.

The Valley is blessed with more than 13,000 square miles of watershed from the mountains and Mogollon Rim. No other large valley in the West compared, and that’s why it was chosen following the National Reclamation Act of 1902. Construction began in 1905 and the world’s highest masonry dam was completed in 1911 at a cost of $10 million. The debt to the federal government was repaid in full in 1955. Today, Roosevelt Lake contains 75% of the Salt River water. The Salt River Project, a quasi-governmental agency, manages the dams and lakes.

Without the watershed and the lakes, the Valley would be practically unpopulated today.