The Old West was fading from reality into the realm of myth by the mid-1920s. Most of the bonafide gunfighters were gone and Hollywood took up the chore of telling how it really was. Tom Mix was earning over $17,000 a week performing super-human feats from atop his famous horse, Tony, and the public loved it. Nobody seemed to care much for the way it really was out in lotus land, so Americans were fed a heavy dose of tight-trousered, fast-drawing, hard-riding heroes.

As late as 1928, a few of the real straight-shooting lawmen of old still walked the beat in Arizona and one of them was Jim Roberts. Uncle Jim, as folks called him, was almost 70 and walked with a stoop. The older folks around Clarkdale remembered him as the deputy sheriff in the rough and tumble town of Jerome nearly 40 years earlier. Singlehandedly, he’d tamed the town taking on all trouble makers with fearless abandon.

One night three men holed up on the outskirts of Jerome after killing another in a card game. They sent a defiant message to Roberts and his young deputy to “come and take ’em.”

“You take the one in the middle and I’ll get the other two,” Roberts said quietly as the two moved towards the desperados. Suddenly the young assistant’s hands began to tremble. Roberts looked at him and said in a kind but firm tone, “Get out of the way, sonny, and I’ll take ’em all.” Moments later all three killers were down. 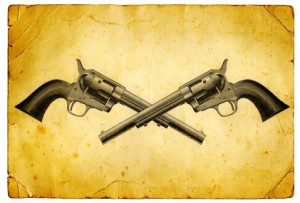 Before his long and illustrious career as a lawman, Jim Roberts was deeply involved in the notorious Graham-Tewksbury feud at Pleasant Valley. Roberts rode with the Tewksburys and all agreed he was the most dangerous man with a gun in either faction.

But that was a long time ago and now the legendary gunfighter of the Old West was a kindly, old gentleman known around Clarkdale affectionately as Uncle Jim.

Youngsters had heard all the stories of this old man but in their eyes he didn’t seem to fit the image of a Tom Mix, or even a Buck Jones or Hoot Gibson. Why, Uncle Jim didn’t even carry his nickel-plated revolver in a fast-draw holster—he packed it in his hip pocket. When they asked him to tell stories about the Pleasant Valley War or his famous shootouts as a lawman, he’d just smile and change the subject. Another thing that bothered the kids was that Uncle Jim didn’t dress like a cowboy. One day, after much prodding, he agreed to draw his famous revolver.

Those used to seeing Tom Mix fast draw and fire 40 rounds from his six-shooter without reloading were disap­pointed when the old man reached into his hip pocket and with slow deliberation, drew the six-shooter and gripping it with two hands, carefully aimed at an imaginary target.

Well, needless to say, there were more than a few youthful doubters in the gathering. “Maybe,” they thought, “those stories about Uncle Jim were nothing but tall tales.” To some it was kind of like waking up on Christmas Eve and catching Santa Claus kissing your mother next to the Christmas tree.

All those doubts about Uncle Jim were laid to rest one day in 1928 when two Oklahoma bank robbers held up the Bank of Arizona (First Interstate Bank) in downtown Clarkdale. The two walked out the door with $40,000 in payroll—the largest heist in Arizona history at the time. Old Jim Roberts was making his rounds just as the two robbers jumped in their getaway car and started to speed away. One turned and fired a shot at the old man. With that same slow deliberation, Roberts reached into his hip pocket, drew his nickel-plated revolver and with a firm two-handed grip, took a bead on the driver.

The pistol bucked in his hand as a bullet struck the driver in the head. The car went out of control, jumped the curb and landed against an electric pole. The other outlaw climbed out of the wreck, stunned. He took one look at the old man with the two-handed pistol grip and meekly surrendered.

There wasn’t any doubt among the youngsters of Clarkdale after that. It wasn’t the clothes that made the man. As far as they were concerned, Jim Roberts could out-shoot, out-think, and out-fight Tom Mix or any of those other Hollywood shooting stars any day of the week.

On January 8, 1934, Jim Roberts died of a heart attack while making his rounds in Clarkdale. It was fitting somehow that one of the Old West’s greatest lawmen, and the last gunfighter in the Pleasant Valley War, should die with his boots on. But wait a minute—one thing I forgot to mention— Uncle Jim didn’t wear boots!