Weaver’s Needle and the Deadly Gold of the Superstitions

Since 1870, when stories about the Lost Dutchman Mine in the Superstition Mountains became a standard item in Arizona folklore, some 40 people have either disappeared or been found dead in and around the suspected location of the mine. The stories about the fabulously wealthy cache of gold supposedly hidden in the mountains are many and varied, but there’s always once constant — Weavers Needle. 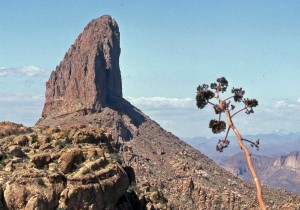 Those who go in search of the lost gold always use Weavers Needle as a focal point. In reality, it is a towering lava plug. Don Peralta, the alleged first owner of the lost mine, called it Sombrero Peak. Others referred to it as the Finger of God. The current name is attributed to Paulino Weaver, an early Arizona explorer and adventurer, who carved his name into the rocky surface. Subsequent treasure hunters saw the name an applied it to the peak.

Today, the only ones getting rich in the search for the gold are the people who print maps that allegedly show the exact location.