A Tribute to a Reluctant Hero in Sacaton

In a small park in Sacaton on the Gila River Indian Reservation, a bronze statue of a young man wearing a military uniform stands next to a bas-relief plaque affixed to a tiled wall. It is a replication of Ira Hayes. He was a U.S. Marine. And a reluctant hero. The plaque depicts six men raising a U.S. flag on Mount Suribachi on Iwo Jima, a small island in the South Pacific, during World War II. Ira Hayes was one of the six men.

The moment was captured by Associated Press photographer Joe Rosenthal, and when it was published in newspapers across America, it gave a war-weary nation a much-needed surge of hope and pride. 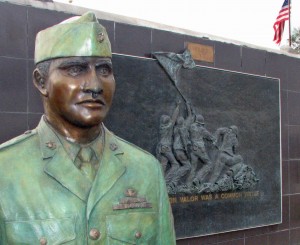 Later, Hayes and two other flag-raisers were pulled from active duty and ordered to participate in bond rallies across the country.

Although he resisted attempts to portray him as a hero, the young Pima Indian was hailed as one everywhere he went. The adulation led to his downfall. Distraught by all the unwanted publicity, and by the fact that so many members of his unit were killed on Iwo Jima, Hayes became despondent and turned to alcohol to find relief. His ordeal continued after his honorable discharge.

He tried to get away from all the furor by returning to the reservation, but it was no use. People found him, shook his hand, took his picture and called him a hero. He left and found work in Chicago but his torment continued. He was cast as a hero in the movies, and as a “drunken Indian” in song. Eventually, he went back to the reservation where his agony ended when he died at the age of 32.

(More detailed versions of Ira Hayes’ life have been published in “Flags of Our Fathers” by James Bradley and “Mysteries and Legends: Arizona” by Sam Lowe.)