According to those who search for buried treasure in Arizona, there’s a fortune hidden beneath the floors of Tumacacori, the old mission near Tubac. The legends say that the church was once not only a place of worship, but also a mill and smelter for a gold and silver mining operation run by Jesuit missionaries in the first half of the nineteenth century.

The prospectors’ hopes hinge on two scenarios. In one, the missionaries learned they were being exiled back to Spain so they loaded nearly 3,000 burros with precious metal, carried the treasure to the mine, then buried the entrance in the hope that they’d come back and retrieve it. But they were never allowed to leave Spain, so now an estimated $25 million in gold and silver may lie hidden beneath the sacred ground. 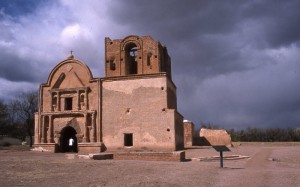 Or so the story goes.

In the second version, the missionaries found a rich silver mine nearby and forced the Opata Indians to work it for them. After the ore was smelted into bars, it was stored in a huge room under the mission.

The Indians also used the room for religious ceremonies, which were a combination of their own paganism and the missionaries’ preaching. At one point, so the story says, they sacrificed a young woman to their gods when she refused to marry a chieftain. When the priests found out, they drove the Indians away then sealed the mine without recovering the wealth.

Or so the story goes.

But don’t go rushing off to Tumacacori with pick and shovel in hand in the hope of getting rich. It’s now a national monument so digging holes on the grounds is strictly forbidden.