Geologists like to say this vast land of dramatic salmon hued sandstone spires was once buried 3,000 feet beneath ancient seas. Over the next several million years, layer after layer of sediments were deposited, then hardened, followed by an uplifting of the land. It’s difficult to imagine, but the tops of these mountains and spires were, at one time, ground level. As the land continued to rise and the sea abated, the forces of wind, rain and time, or simply said, the rough hand of nature etched and sculpted the spectacular sandstone monoliths that we call Monument Valley. 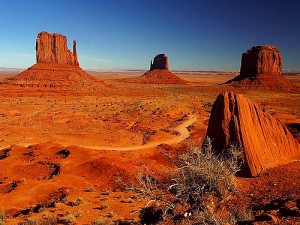 Anthropologists generally agree that the people we call Navajo came to North America some 6,000 years ago over a land bridge on the Bering Strait. They go on to say these people drifted down from Canada and began to settle in Monument Valley about 500 years ago.

Scientifically speaking, that’s how all this came to be. However, the old Navajo Medicine Man tells it another way. It is usually in the winter, when Left-Handed Wind howls fierce across Dinetah, that the storyteller gathers his listen­ers inside the confines of the hogan and tells, once again, the legend of the emergence of the people into the Glittering World.

According to Navajo legend, the people of Dinetah pro­gressed through three previous worlds before arriving in this, the Fourth World. First World was black as there was no light from the sun, moon or stars. The creatures who inhabited First World had no form and were called Mist People.

In this mythological world, First Man and First Woman were created. Their purpose was to arrange conditions suitable for the Navajo. Unfortunately, the Beings began quarreling and began casting evil spells upon one another, so First Man, First Woman, along with the Mist People left and moved up into the Second, or Blue World.

Here they found other people and also animals including badgers, wolves, kit foxes and cougars. These animals were at war with each other. To add to the chaos, the Evil Beings from First World had also emerged into Second World. Coyote, a cunning, but sometimes mischievous critter, who always exists in these stories, persuaded the people to leave the miseries of the Blue World and move to Third World.

The Third World was called Yellow World and had two rivers. One, a female, ran north and south. The other was male and it ran east and west. First Woman was not happy with Third World and wanted the people to move on to Fourth World so she encouraged Coyote to steal Water Monster’s baby knowing it would anger Water Monster. Water Monster, as expected, caused a great flood. All the people and animals climbed up and out of Yellow World and descended into the Fourth or Glittering World. Turkey was the last to escape the rising flood waters. At the last moment, the waters touched the tip of Turkey’s tail feathers and that is why, to this day, the tip of the turkey’s tail feathers are white.

In Fourth World the deities, called Yay-ee-ee, taught the people how to live in the peaceful way and First Man and First Woman taught the people how to build hogans and to bless them with white and yellow cornmeal along with pollen and powder from prayer sticks. The first hogan was supported by five forked poles, one from the north, south and west. Two poles supported the doorway which was always in the east because First Headman, who gave wisdom to the people who lived in that direction.

Day and Night, the Sun, Moon and Stars were created in Fourth World. The four sacred mountains, San Francisco, Navajo, La Plata and Blanca were created from soil carried in from Third World.

One day, First Man and First Woman found a baby girl. The child grew rapidly into the beautiful Changing Woman representing nature and the seasons. She became the most beloved of all the Holy People.

Changing Woman mated with the Sun and gave birth to The Twins. Because Fourth World was infested with terrible monsters, Changing Woman feared The Twins would be harmed. She hid them deep underground in a hole she’d dug in the hogan. Even their father, the Sun, did not know their whereabouts.

Today those massive monsters stand frozen in time in Monument Valley. And, that’s the way this beautiful valley and its indestructible people came into being.