Excerpt from Valley 101: A Slightly Skewed Guide to Living in Arizona, a collection of Clay Thompson’s columns for The Arizona Republic. (Originally published October 20, 2002.)

Q: I have an 1891 map that shows an area in northeastern Arizona as “Diamond Fields.” Have diamonds been found in this area, and if so, are diamonds mined there now?

A: This turned out to be pretty interesting. There is indeed a wide spot on the road near the junction of U.S. 160 and Arizona 118 called Diamond Fields.

In 1872, a pair of prospectors named Philip Arnold and John Slack walked into a bank in San Francisco with a bag full of diamonds and rubies and other gems they had found at a site that they refused to divulge. 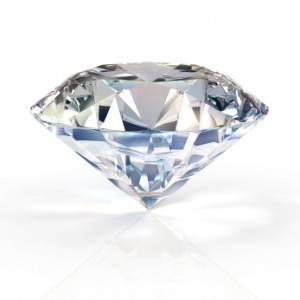 They were, of course, crooks, and the gems were industrial-grade stuff they had picked somewhere.

Nonetheless, they conned a pack of investors into setting up a $10 million syndicate in what became known as the Great Diamond Hoax.

You have to remember, as Trimble pointed out, that this was a time when folks thought you could find gold in any coyote hole in the West. A brochure for one mining scheme at the time showed an ocean-going ore ship steaming up the Hassayampa River, Trimble said.

The hoax is a long and colorful story, but it comes down to this: When pressed for details, Arnold and Slack led a blindfolded representative of the investors to a site in southern Colorado they had “salted” with their low-grade gems. The plot was eventually undone by Clarence King of the U.S. Geological Survey who found the site and quickly spotted the hoax. Arnold and Slack skipped town with $155,000. In the meantime, however, diamond fever was sweeping the West, and prospectors were scouring the land looking for Arnold and Slack’s bonanza. One focus of the search was in far northeastern Arizona where, of course, there were no diamonds, but there is still Diamond Fields.