Early Political Shenanigans: How Phoenix Became the Capital of Arizona

Territorial citizens took great delight applying social acupuncture to local politicos. It’s been said with dubious pride that Arizona had some of the finest legislators money could buy. Old timers around Jerome used to say that every time the subject of a bullion tax would come up before the legislature Henry Allen, superintendent of the United Verde Mine, would go over to the local bank, make a sizable withdrawal and announce to everyone within earshot that he was “off to Phoenix to buy some mules and jackasses.” A few days later, he would return, without livestock but by some coincidence the bill for the bullion tax would die quietly in some committee soon after.

Territorial legislators were generally long on politics and short on statesmanship. The pay wasn’t much, they only met every other year and every bill they passed on was subject to review in Washington.

I reckon the most maligned of all 25 sessions was the infamous Thirteenth of 1885. Arizona was still pretty wild and woolly at the time. Geronimo and his band of rogues was scourging southern Arizona, Tombstone was just getting over the bloody feuding between Earps and the “cowboys” and the notorious Pleasant Valley War was heatin’ up. 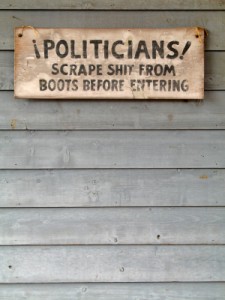 The boisterous parties and general rowdyism made a cowboy Saturday night look tame by comparison. They met in Prescott and had barely convened when a fist fight broke out between delegates Julius A. Brown and Lafayette P. Nash. Another delegate took a swing on a colleague with a monkey wrench and still another threatened a detractor with a bullwhip.

Two other antagonists decided to have a shootout but couldn’t agree on weapons. The trouble started in a local watering hole when a Frenchman named Professor Arnold accused delegate Welford C. Bridwell of repudiating his heritage by legally changing his French surname. Bridwell a.k.a. Clay Beaulord—a hardbitten, ex-army scout—took exception to the professor’s remarks and poked him in the nose and smashed his eyeglasses. The bloodied but proud Frenchman leaped to his feet and challenged Bridwell to a duel. Given challenges choice, Bridwell-Beauford wanted to use Colt revolvers. The fuming challenger opted for the more genteel French sabers. Since no such weapons were readily available the two decided to cool their tempers with a few glasses of Mumm’s Extra Dry and the matter was soon forgotten.

The preliminaries now settled, the delegates got down to the business of politics. They had come to Prescott from the far reaches of the territory and each had some favorite sacred cow to obtain or retain for their county. The delegates from Tucson’s delegation handed their representatives a satchel containing some $4,000 and said nothing short of the capital was acceptable. Willcox wanted to split off from Cochise County and form a Sierra Bonita County. The delegates from Tombstone were equally determined to see that the county remained intact. Yuma wanted to keep the Territorial Prison and Florence wanted a bridge across the fickle Gila River. Tempe wanted a normal school and Phoenix wanted an insane asylum. Prescott, of course, wanted to keep the capital.

Tucson’s delegates ran into some trouble on their way to Prescott and had to take the long way around. The Salt River was running high at Judge Hayden’s ferry crossing, (Tempe) so they boarded the Southern Pacific at Maricopa and rode to Los Angeles thence back on the Santa Fe to Ashfork where they climbed on a stagecoach for the last 50 miles south to Prescott. At Hell’s Canyon they encountered a blinding snowstorm so in desperation delegate Bob Leatherwood climbed on a borrowed mule and with the satchel of money, hightailed it to Prescott.

Unfortunately for Tucson, Leatherwood arrived too late. The trade-offs had been made. Prescott kept the capital; Phoenix got an insane asylum; and Tempe, a normal school. Also, Yuma retained the prison and Florence got a bridge across the Gila. The venerable Rio Gila has, however, a long history of going its own way and shortly after the structure was dedicated it changed its course and left that bridge standing by itself out there in the desert.

Willcox didn’t get to form its own county but the heaviest blow fell on Pima County. Tucson didn’t get the capital and as a consolation prize was awarded a university.

Indignant Tucsonians didn’t accept this award with a great deal of enthusiasm. When the delegates came home they were greeted with a barrage of rotten vegetables and some sorehead threw a dead cat. But, the award for collegiate naivete goes to a prominent citizen who owned a saloon. “What do we need a university for?” he cried, “Students won’t buy booze!”

In the spring of 1885 their work all done, the Thirteenth Territorial Legislature adjourned. They’ve been called the Bloody Thirteenth for all their donnybrookin’ and the Thiev­ing Thirteenth because they spent some $47,000 for ameni­ties when the budget called for $4,000 and only one delegate was re-elected the next time around.

In spite of all this chicanery, the positive, lasting effects of their efforts were far reaching. Funds were allocated to build a railroad from Prescott north to the main line on the Santa Fe and another linking Phoenix to the Southern Pacific at Maricopa. A fine mental institution was established at Phoenix. In 1891 the University of Arizona, situated on land donated by two gamblers and a saloon keeper opened its doors. Incidentally, at that time there was not a single high school in the entire territory.

In the spring of 1886, the Territorial Normal School, at Tempe, opened with 33 students. After several name changes it became Arizona State University in 1958.

The continuing issue of where to locate the “capital on wheels” was finally settled in 1889 when it was located permanently at Phoenix.

There is an old piece of Arizona folklore that historians can’t prove, nor can they disprove, which perhaps explains how this happened. It seems that the evening before the final vote was to be taken, one of the honorable delegates from Yavapai county went down to pay a visit to one of the ladies of the evening. He had a glass eye, which he was quite vain about and after he blew out the lamp he placed the artificial eye in a water glass on a table by the bed. Sometime during the night his lady-friend got thirsty and swallowed the water and its contents.

The next morning when the delegate realized what tran­spired, vanity prevented him from attending the session and Phoenix took the capital away from Prescott by one vote.