The Escape of Desperado Augustine Chacon

Augustine Chacon was one of the last of the hard-ridding desperados who rode the owl-hoot trail in Arizona around the turn of the century. Chacon was a resident of Sonora but did most of his mischief in Arizona, leading his gang on far flung forays of pillage and plunder. One time Chacon and his pistoleros robbed a stagecoach outside Phoenix. On another occasion they held up a casino in Jerome and killed four people. 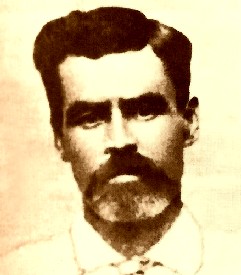 After each raid, they’d hightail it back to their sanctuary in Mexico. Chacon once boasted he had 30 gringo notches carved on the butt of his pistol. Some say he carried much Apache blood in his veins. The bandit’s undoing began after he murdered a deputy named Pablo Salcido at Morenci in 1896. Lawmen caught up with Chacon before he could reach the border and he was brought to Solomonville and tried for murder. A jury found him guilty and the notorious bandit was sentenced to hang. It looked like the end of the line for one of Arizona’s most cold-blooded killers.

Augustine Chacon spent the weeks before his hanging plotting an escape. He was a tall, lean, handsome man with a thick shock of hair and a way with the women. His friends and admirers, of which there were many among the poor Mexicans living in the nearby mining camps, called him Peludo, or Hairy One, and saw him as a kind of frontier Robin Hood. They were eager to assist the charismatic outlaw in his getaway. A beautiful senorita-groupie inserted a hacksaw blade in the binding of a huge family Bible and smuggled it into Chacon’s cell. During the next few evenings while Chacon was sawing away on the bars, the other prisoners, equipped with a guitar and concertina endeavored to play some lusty corridas or songs. The cacophony, or music, was intended to cover up any noise from Chacon’s sawing. On the night of the escape Chacon’s lady friend slipped inside the jail, batted her long eyelashes and smiled sweetly at the night guard. That was enough to lure the red-blooded deputy into the backroom for a brief, but deep and meaningful, relation­ship. Meanwhile, the band played on and Chacon sawed through the last bar, escaping into the night just a few days before his scheduled hanging.

Chacon continued his wild and woolly ways but his days were numbered, however, for in 1902 the newly-formed Arizona Rangers vowed to get him. Ranger Captain Burt Mossman slipped into Mexico, captured the bandito and delivered him to authorities amidst howls of protest from the Mexican government. This time Augustine Chacon was guarded closely: no saw blades inside a Bible, no mariachis and no beautiful damsel willing to relinquish her virtue on his behalf. On November 23, 1902, Augustine Chacon was hanged at Solomonville.