Who was the McDowell in Fort McDowell?

Excerpt from Valley 101: A Slightly Skewed Guide to Living in Arizona, a collection of Clay Thompson’s columns for The Arizona Republic. (Originally published June 10, 2001.)

Q: Who was the McDowell in Fort McDowell?

A: This is an excellent question because it has nothing to do, at least not directly, with Jack Swilling or Darrell Duppa, two worthies of whom we are thoroughly sick and tired. 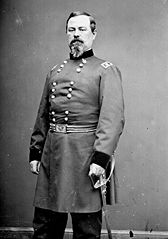 Fort McDowell was founded in 1865 at the juncture of Sycamore Creek and the Verde River by five companies of the army’s California Volunteers. It was near several Indian trails and convenient for expeditions against the Yavapai and Tonto Apache, who were tearing up the pea patch at the time.

It was named for Gen. Irvin McDowell, the commanding officer of the Department of California and New Mexico. He held this post because it was about as far away from the Civil War as his superiors could put him.

Born in Ohio in 1818, McDowell was a West Point graduate and a veteran of the Mexican War. He was a skilled administrator but a remarkable failure in the field. It was McDowell who commanded the Union army at the first battle of Bull Run, where he proved to be one very sorry pooch indeed. Demoted to a division command, he returned for the second battle of Bull Run. In the debacle that followed, he was especially singled out for remarkable ineptitude. Although an official inquiry later cleared him, it was the end of his career as a field commander, and he was shipped West. He died in San Francisco in 1882.

As a military post, it was not a choice assignment. Historian Marshall Trimble [and Arizona Oddities contributor!] quotes this lament from one officer posted there:

“Four years I have sat here and looked at the Four Peaks, and I’m getting almighty tired of it.”