Tanks by the Road in Bouse

BOUSE — Regardless of which way you’re headed, State Route 72 enters and exits Bouse in less than ten minutes. It would be easy to miss the whole town if it weren’t for the enormous pieces of military equipment sitting in a little park alongside the road. There are two of them. One is a M60 Patton Tank. The other one looks like a tank but it’s actually an M109 self-propelled howitzer. 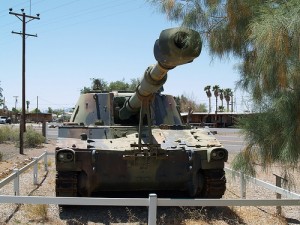 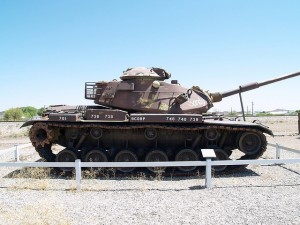 They look out of place in this rather barren stretch of desert, but there was a  time when tanks and other similar vehicles were common to the area. During World War II, Gen. George Patton selected several desert locations in Arizona and California as training sites for tank battalions. Camp Bouse was located about 30 miles away from the town of Bouse, and was one of twelve such installations built in the southwestern deserts. Six tank battalions, one armored infantry battalion, and an ordnance company trained at Camp Bouse.

Today, the two war machines, seven concrete pillars adorned with plaques and some murals pay homage to the time and the men who trained here. Bouse is on State Route 72 between Parker and Vicksburg.