Help Us Solve the Marilyn Monroe Mystery in Phoenix

For nearly a decade, an image of actress Marilyn Monroe caught the eyes of those who passed the northeast corner of 20th Street and Indian School Road in Phoenix. The mural-sized rendition of the late sex symbol languished for more than 30 feet on a black background on the west side of a building occupied by Truckmasters, and although many are familiar with it, nobody seemed to know why it was there or who put it there. 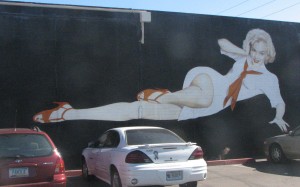 One version offered to me a few years ago is that the owner of a motorcycle shop on that corner wanted to paint a sign on the building, advertising his business but couldn’t get a permit from the city. So, he commissioned the painting of Marilyn instead because it was a mural, not a sign. The signature under the painting merely said “Medina ’02” but there were no other clues.

We now know that the mural was painted by Artist Tim Medina. Unfortunately, it was painted over in the spring of 2016. Are you one of the lucky people who got to see it in its prime?