Why Doesn’t Sky Harbor Airport have a Terminal 1?

Excerpt from Valley 101: A Slightly Skewed Guide to Living in Arizona, a collection of Clay Thompson’s columns for The Arizona Republic. (Originally published September 26, 1999.)

Q: Why, when you drive into Phoenix SkyHarbor International Airport, is there a sign that says there are three terminals: 2, 3 and 4? Where I come from, we started counting at “one.”

A: That sign just nags at you every time you see it, doesn’t it? It’s like a picture that isn’t quite straight or like sitting across from someone with a loose thread on their cuff: You just have to fix it.

There is a perfectly good reason for the terminal-numbering system. Actually, it isn’t perfectly good, but it will have to do. And if you think it’s silly now, there is a possibility that in the far distant future, we will only have two terminals — 4 and 5. 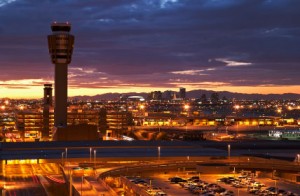 First, some history. Time was, children, when we actually had a Terminal 1. It stood a bit west of Terminal 2. It opened in 1952 and was a big deal at the time. Its restaurant, which for a time barred Blacks, was described as “a symphony in chrome, leather and soft-toned wood.”

People actually went to the airport to eat. Can you imagine? Terminal 1 was Terminal Only until 1962, when Terminal 2 opened. There was almost immediately talk of tearing down Terminal 1, but it hung on until 1991, when it was razed shortly after Terminal 4 opened. At which point we were left with terminals 2, 3 and 4.

The city last year [1998] spent about $2.5 million redoing all the signage at the airport, and that would have seemed like a pretty good time to renumber the terminals as 1, 2 and 3. But Bob Petrillo, an Aviation Department engineer who worked on the new signs, said that after all those years, new numbers wouldn’t have worked.

“I think that would have caused even more confusion. So many people know, for instance, that America West is in Terminal 4, and that building is Terminal 4,” Petrillo said.

The long-range plan, according to Petrillo, calls for a big new terminal and destruction of Terminal 3.

Under the current logic, we would then have a sign that read “There are two terminals: 4 and 5,” but Petrillo said it is more likely that they would be known as the East and West terminals.