How to Keep Scorpions Away from Your Home

Excerpt from Valley 101: A Slightly Skewed Guide to Living in Arizona, a collection of Clay Thompson’s columns for The Arizona Republic. (Originally published July 18, 1999.)

Q: Help! My house is overrun with scorpions, and I hate them.


A: How ungracious of you. First of all, the scorpions were here first, and secondly, they absolutely adore you.

And what do they get from you? The back of your Reebok.

And, in a way, it’s your fault there are so many of them in the first place. Well, not your fault personally, but our fault collectively.

There are about 35 species of scorpions in Arizona, but only five or six in the Phoenix area, including our personal favorite, the giant hairy scorpion.

All are venomous. That’s their stock-in-trade. But according to Marilyn Bloom, a microbiology research specialist at Arizona State University, there is only one species that really needs concern us: the bark scorpion.

This is a nasty little critter, skinny and yellowish in color, and it’s sting can cause intense pain, numbness and, at least in theory, death. Bloom said there are no accounts of anyone dying of a scorpion sting in the 40 years that records have been kept.

Bloom has an interesting job. With the help of three goats, she produces scorpion antivenin for distribution to area hospitals, doctors and veterinarians. During the summer, she gets a dozen or so requests for antivenin a week.

There are scorpions all over the Valley, but many of us have gone for years without ever seeing one, much less getting stung. Some people believe they are more common in areas where new housing is encroaching on the scorpions’ natural desert habitat. That’s only partly true, according to Bert Putterman, general manager of Arizona Exterminating Co. 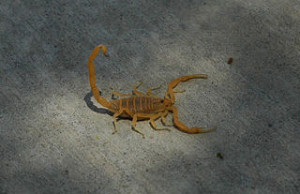 Weather stripping and caulking and can prevent scorpions from entering your home. iStock

On a hunk of untouched desert, the scorpion count may be relatively low, Putterman said, “but when a development comes in, suddenly there might be thousands to an acre.” That’s because when houses and humans show up, “it’s just like a Furr’s Cafeteria moved in” to scorpions, he said.

Our security lights and streetlights attract bugs, which, in turn, attract scorpions. Our rock gardens and woodpiles and laundry rooms and well-watered lawns provide shelter and water. We’re the best thing that ever happened to scorpions.

So, as the urban area grows, so does the scorpion population.

“Twenty years ago, when I first moved here, we’d get three or four calls a summer for scorpions, and we’d go out on them just as a novelty,” Putterman said. “Ten years ago, we could identify specific areas of infestation
(around the Valley.) Today, 75 percent of the calls we get are for scorpions.”

If you do have scorpions in your house, it’s probably not by their choice. Scorpions are most comfortable in conditions 75 to 95 degrees, Putterman said, and chances are the coolness of your house makes them sluggish. They’d just as soon be outside, perhaps under that nice cool damp towel your kids left on the lawn after they played in the sprinkler.

Because scorpions are nocturnal and most exterminators are not, spraying them probably isn’t going to have much effect. Short of a direct hit, most pesticides don’t really bother scorpions much. On the other hand, spraying will kill their food source, bugs.

But killing the bugs might not make that much difference. Bloom says a healthy scorpion can go nine to 12 months without eating. That means a bark scorpion would be perfectly content to curl up in the toe of a seldom-worn shoe for months on end.

Putterman and Bloom offered a number of tips for keeping scorpions away:

Excerpt from Valley 101: A Slightly Skewed Guide to Living in Arizona, a collection of Clay Thompson’s columns for The Arizona Republic. (Originally published July 18, 1999.)