The Southern Pacific railroad stretched its steel ribbons across Arizona in the late 1870s, reaching Tucson in March, 1880. The rail station nearest Phoenix was 35 miles to the south at Maricopa. From the beginning, local citizens began clamoring for a railroad. Despite the fact that thousands of miles of track were being laid across the nation each year, seven railroad companies were organized and went broke in a 10-year period before a line was built from Maricopa to Phoenix.

Carving a Path Across Arizona

During that time the stage line of Gilmer, Salisbury and Company ran a daily from Maricopa to Prescott, passing through Phoenix. A proposed railroad followed the same route, the old Woolsey Road, north to New River, then up through Black Canyon, hugging the Aqua Fria River most of the way before veering off to the territorial capital, nestled picturesquely in the Bradshaw Mountains. A tri-weekly stage also ran north to Prescott via Wickenburg.

In 1885, the 13th Territorial Legislature, much-maligned as the infamous Thieving Thirteenth for its political shenani­gans and free spending, created an act that provided for a railroad line linking Phoenix to the Southern Pacific at Maricopa. The original railroad right-of-way was designed to go west of South Mountain and approach Phoenix from that direction. However, residents of Tempe put on so much pressure the line was changed. The Maricopa and Phoenix Railroad was chartered and the task of establishing grades and laying down track began in earnest on November 1, 1886. W. J. Murphy, famed as the entrepreneur who brought about the construction of the Arizona Canal, was the con­struction boss. Bridges for the Gila and Salt Rivers were to be built in San Francisco and shipped to the sites for final assembly.

An argument developed between the Pima Indians, who owned part of the right-of-way, and the railroad but there was no stopping the gandy dancers and graders. They trudged into the reservation despite threats from the natives and their agent Elmer Howard. Meanwhile, in Phoenix, another mar­velous marvel had occurred. On December 21, 1887, gas lights were turned on for the first time. Those smoky old coal oil lamps would soon be a thing of the past.

By January 10, the construction crews reached the Gila and work on the bridge had begun. However, the trespassing issue with the Pimas hadn’t been resolved and the Secretary of Interior suspended work and ordered the crews off the reservation. Negotiations with the natives lasted some six weeks before a settlement was reached. The Pimas were paid $60 to $85 per acre totaling $707 and work on the line was resumed.

By the end of April, the line was extended to nine miles north of the Gila. Rumors spread that the railroad would reach Phoenix by June 1. Railroad stations were being built at Tempe and Phoenix, and a grade was already being cut at the south end of the Papago Buttes. A sense of excitement was sweeping the town. Folks rode out to the banks of the Salt near Hayden’s Ferry to watch construction on the bridge. Teamsters were packing their gear and prepar­ing to move their headquarters to some burg that was still without a railroad. Shopkeepers were pondering the cornu­copia of new merchandise from eastern suppliers for their customers, and real estate developers (yes, we had ’em then, too) were eagerly getting ready to cash in on the boom.

About that time, Murphy’s Law revealed itself. The con­struction crews ran out of track, causing a three-week delay. Finally, on June 19, 1887, a new Baldwin locomotive with “Phoenix” painted on its side chugged into Tempe.

Meanwhile, across the river in Phoenix plans were being made to welcome the railroad. Progress slowed as workers donned heavy buckskin mittens. The blazing summer sun made the rails too hot to handle. Work ground to a halt once again as enthusiastic locals held a boisterous, but prema­ture, weekend fiesta. 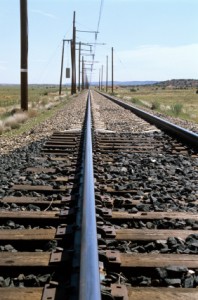 On Monday, nobody showed up for work and new crews had to be hired. Finally, on July 3 the last of the rails was “laid in and tied down.” Captain William Hancock, the man who surveyed the original town site 17 years earlier, drove in the last spike. The long-sought dream had come true—the railroad had, at last, arrived.

The next day, July 4, brass bands played, politicians spoke, an honor guard fired a grand salute and a gala celebration was enjoyed by the throngs that came out to whoop it up. The tremendous dust storm that swept across the valley that afternoon did little to dim the optimism of the little metropolis that had finally metroped.

After the hoopla died down that day, the engineer threw the little Baldwin into reverse and backed her all the way to Maricopa. Phoenix had joined the civilized world but still lacked a round house. A second-hand turntable was in­stalled several months later.

Citizens, Criminals Clamor for the Railroad

With the purchase of a $3 ticket, same as the stagecoach fare, Phoenicians could now make the 2-hour and 40-minute ride to Maricopa in relative comfort—a far cry from those leather-slung cradles on wheels called stage coaches.

For nearly 40 years the Maricopa and Phoenix Railroad performed its mission admirably. Perhaps the most exciting event occurred in 1910 when the train was held up by youthful Woodson brothers. Using borrowed pistols and rented horses, they robbed the passengers of some $300 then rode out into the desert towards the Mexican border. The sheriff of Maricopa County, at the time, was Carl Hayden.

Hayden quickly organized a posse and went in pursuit. He knew they wouldn’t get far in the desert on horseback, so he commandeered a large touring car at Maricopa and contin­ued the chase. There weren’t any roads so the big car dodged cacti and negotiated the arroyos that slice across the Sonoran Desert. Hayden and his posse caught up with the desperados near Cucklebur. The searing desert heat had taken its toll on man and horse and the pair meekly surrendered. It was the first time in history a posse had pursued outlaws in an automobile.

Sheriff Hayden’s fame spread far and wide after the capture, enhancing his political fortunes. The next year he ran successfully for the single congressional seat in the new state of Arizona and the rest is, as we say, history.

End of an Era

The era of the Maricopa-Phoenix Railroad ended in 1926 when a new Southern Pacific mainline reached the capital. The event was the culmination of a long campaign. “Phoenix Must and Will Have a Mainline Railroad” was even a part of the masthead on the Arizona Gazette [later Phoenix Gazette, and now The Arizona Republic) for 20 years.

Another major event in Phoenix rail history occurred in 1895 when the Santa Fe completed its line from Ashfork, Prescott to Phoenix. Historians generally regard this as the end of the frontier period in Arizona.

When Arizona became a state in 1912 the only viable means of hauling goods and people was by rail. When the horseless carriage arrived on the scene folks began clamor­ing for better roads. Road races between Los Angeles and Phoenix featuring such famous drivers as cigar-chomping Barney Oldfield and Louis Chevrolet were staged to promote road construction. Despite these efforts the state had less then 300 miles of paved highway in the late 1920s.

In 1944, the Federal Highway Act provided funds for an interstate highway system. These monies were used to complete the paving of U.S. 80, the old Gila Trail across southern Arizona and Route 66, the Beale Camel Road across the northern part of the state.