Why are Phoenix and Tucson so Different?

Excerpt from Valley 101: A Slightly Skewed Guide to Living in Arizona, a collection of Clay Thompson’s columns for The Arizona Republic. (Originally published January 7, 2001.)

Q: My grandpa and grandma live in Tucson, and when we visit them, I always wonder why are Phoenix and Tucson so different?


A: This is an excellent question. The answer would fill a volume or two, but the short explanation is: History, dear child, it’s all about history.

In the great scheme of things, Phoenix is a fairly young city.

Granted, the Hohokam and other Native Americans lived around here for centuries, but a permanent European presence was not established until the Army opened Fort McDowell in 1865. The hay camp that supplied the fort eventually became Phoenix. 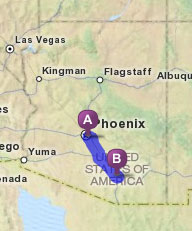 By contrast, Tucson’s European roots go back to 1694, when the tireless missionary Father Kino founded a small mission roughly near the Miracle Mile overpass at Interstate 10. Not far away was another village Kino called San Cosme de Tucson. It was more or less the northern most point of the Spanish settlement in what is now Arizona.

The site grew to be a Spanish presidio, a fortress against Apache raids and, to make a very long story very short, eventually became good old Tucson, the Old Pueblo.

The name Tucson, by the way, comes from the Pima word schookson, according to historian Marshall Trimble. It means “black at the foot of ” and probably refers to the dark base of Sentinel Mountain, also known as “A” Mountain.

It is our considered opinion, young reader, that time has given Tucson a stronger sense of Hispanic culture, architecture and history and a somehow different outlook on matters than you might find in brash, young Phoenix, still a relative newcomer to Arizona.