The Wounded Goddess Atop the State Capitol Dome

PHOENIX – The white statue that has been a permanent fixture atop the State Capitol dome for more than a century goes by several names.

She is called the Goddess of Victory, Statue of Justice and Winged Victory, but for a time the nickname Bullseye could have also been applied. 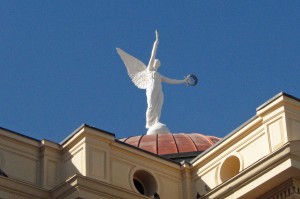 The zinc goddess was cast in Ohio and purchased by the Territory of Arizona in 1898 for $150. When the Capitol building was formally opened in 1901, the 17-foot sculpture was placed on top of the copper dome to serve not only as a symbol, but also as a weather vane. But it frequently didn’t get the respect it deserved because of the cowboys who regularly visited Phoenix at the time. After a hard night in the local saloons, the cowpokes often amused themselves by riding to the Capitol and firing their six-guns at the winged icon to make it spin. Years later, during a restoration, workers found bullet indentations on her wings.