What Kind of Plant is a Tumbleweed?

Excerpt from Valley 101: A Slightly Skewed Guide to Living in Arizona, a collection of Clay Thompson’s columns for The Arizona Republic. (Originally published January 15, 2002.)

Q: Are tumbleweeds a specific plant or is that a generic term for any dead plant that is blown around by the wind?

A: New to these parts, stranger? Actually, so are tumbleweeds, relatively speaking.

Tumbleweeds really are a specific plant, the mature form of the Russian thistle, Salsola iberica.We think of them as being a real symbol of the West: wide-open spaces and the Sons of the Pioneers and all that. The fact of the matter is tumbleweeds are immigrants from the steppes of Asia. I didn’t know that before, even though during my Wonder Bread years I spent many extremely boring hours digging them out of the ancestral estate. 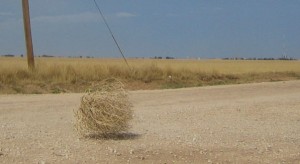 The first seeds arrived in the Dakotas sometime in the 1870s in shipments of wheat or flaxseed from Russia. They were on the West Coast by 1900. They are considered to be peregrinating plants—highly traveled.

Russian thistles now are found in about 19 countries outside Asia. They do not compete well with native plants in undisturbed areas, but give them a farm field or ditch and they’ll move right in.

They also do well in salty soil. The name Salsola comes from the Latin word for salt. They can grow to be as big as small cars. In the late 1930s, tumbleweeds completely engulfed the small town of Lester in western Maricopa County. Several chickens were smothered, and the townsite had to be abandoned.

I made that up.

The whole tumbling business is, of course, how the plant disperses its seeds. When the thistle is mature, it dries up, snaps off from its roots with the help of special cells in its stem and waits for the wind to give it a ride. They can produce up to 100,000 seeds that go flying off as the plant tumbles along.

As far as I know, tumbleweeds are not really good for anything except the annual tumbleweed Christmas tree in Chandler, a pleasantly goofy tradition since 1957.