Geronimo’s Face In the Rocks

Geronimo, the fierce Apache chief, is depicted in may ways both in Arizona and around the nation. His image is on everything from T-shirts to books about the Wild Wild West. But none is more enduring than his image in the Chiricahua National Monument in southeastern Arizona. It’s made of rocks. 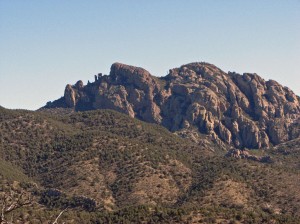 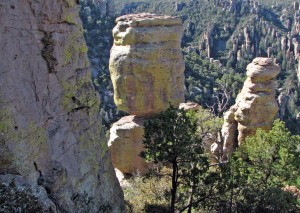 The face is a profile and takes a bit of imagination to recognize it, but once you spot the nose, chin and forehead, everything becomes clear and there he is. (Click on the images to enlarge.) It’s one of many rock formations found in the monument, located about 32 miles south of Willcox off State Route 186. An eight-mile paved road wanders through the park and past most of the huge shapes. Besides Geronimo’s Head, one of the more amazing is Big Balanced Rock, a thousand ton boulder resting on a narrow pedestal.

The monument goes by many names, including “Wonderland of Rocks,” “Cartoons in Rock” and “Land of the Standing Up Rocks.” The area was formed more than 27 million years ago, during the Turkey Creek volcanic eruption.