“I’m a hardrock miner an’ I ain’t afeard of ghosts But my neck hair bristles like a prospector’s quills An’ I knock my knuckles on the drift-set posts When the Tommyknockers hammer on the caps an’ sills An’ raise hallelujah with my pick and drills.”

Back in 1850, when the New Mexico territory was cre­ated, the wild, untamed western portion that would become Arizona was sparsely populated by non-Indians. The only white community was Tucson. Word quickly trickled back east about the vast mineral riches. “If ya stumble on a rock, don’t cuss it—cash it” or, “If ya wash yer face in the Hassayampa River ya can pan four ounces of gold dust from yer whiskers.” Rumors—but each one sent thousands of would-be millionaires scurrying up hundreds of arroyos searching for the elusive madre del oro.

Placer gold, the kind you could mine with the toe of your boot, or a jackknife, soon played out and the day of the romantic jackass prospector evolved into the era of the hardrock miner.

In the early days of underground mining, highly skilled Cornish miners were imported to do the work. They called the close-knit miners, Cousin Jacks.

Before caged elevators came into use, miners were low­ered hundreds of feet into the murky depths in a big steel bucket—powered by a “burro engine,” which lowered the bucket on a long cable. Since it was pitch dark, the men carried candles, at first. Later they wore tiny oil lamps on their caps. Two men worked as a team. One swung a nine-pound hammer, the other turned the drill. At the end of the shift they filled the holes with explosives and blasted out the rich ore.

It was dangerous work. Cave-ins trapped them causing a slow death with falling rocks crushing them to death in an instant. A broken cable could send helpless miners tumbling hundreds of feet to their death. Fires were common and feared the most. Death was a constant companion to these hard-rock miners. 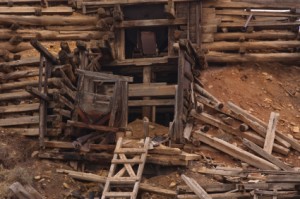 Men who work where danger is a way of life have a tendency to embrace superstitions and habits that may seem odd or strange to an outsider. The miners believed, for example, that it was bad luck for a woman to go into a mine; that if a man’s work clothes slipped off their hook in the change room he was going to fall into a hole; and if one’s lamp didn’t burn bright, it meant his wife was stepping out with another man.

Miners often put their trust in critters such as canaries, mules and rats. Poisonous gasses drifting through the tun­nels were a silent killer. Since canaries couldn’t live long in the foul air, miners took them down into the hole. When the canary died it was time to get out, pronto. Mules could be prophetic. One time a mule headed out of the tunnel before the ore car was filled. While the miner went out to retrieve the animal the whole place caved in. Rats also had a keen sense of danger. Like leaving a sinking ship, “When the rats move out, so does the miner.”

The most unusual of the Cornish miner’s superstitions were the Tommyknockers. These mischievous little people stood only two feet tall, had big heads, long arms, wrinkled faces and white beards.

It was said the little sprites sneaked into the luggage of the Cornishmen as they left for America. Once here, they infiltrated the mines by hiding in the miners lunch boxes. Old timers said the Tommyknockers communicated with miners by tapping on the walls with a code similar to the one devised by Samuel Morse. Sometimes these tappings warned of pending disaster while others gave direction to rich pockets of ore. Many a hard-rock miner swore his life was saved only because he’d heeded the tappings of the little people and made a hasty exit. Tommyknockers were credited with locating many a bonanza. But you had to listen to the Tommy-knocks. Miners claimed if one heard a “tap, tap,” it meant “that’s it” or “dig here;” whereas, “tap, tap, tap” meant “don’t dig there.”

Then, there was old Gassy Thompson. He was assisted in his quest for gold, not only by the Tommyknockers but by a diamondback rattlesnake and a pet dog appropriately named Digby. One day he killed a big “she-male rattler” and noticed a baby crawling away. He took the little critter home and made a pet of it. The snake came to love Gassy and followed him everywhere. Gassy believed that since the snake was much closer to the ground it could spot the gold he missed (Makes sense to me!). So he trained the little feller to recognize gold. Whenever the snake found a nugget it would coil up and start rattling. Gassy claimed on one occasion the snake found a $2,700 pocket of gold.

During hot weather Gassy would search for gold in the cool confines of abandoned gold mines. He learned to com­municate with the Tommyknockers and they would tell him where to look for the gold. Then he’d bring in Digby to do the manual labor.

Skeptics were prone to doubt Gassy Thompson’s meth­ods of finding gold but one thing is certain—he always found more rich pockets of gold than all the other desert rats put together.