Are There Opossums in Arizona?

Excerpt from Valley 101: A Slightly Skewed Guide to Living in Arizona, a collection of Clay Thompson’s columns for The Arizona Republic. (Originally published April  5, 2002.)

Q: My wife swears she saw an opossum the other night while walking the dog in our Mesa neighborhood. I think she was seeing things. Settle our bet. Are there opossums in Arizona?

A: Are there opossums in Arizona? Are you kidding?

Why do you think some parts of the state are uninhabited? There are opossums out there the size of St. Bernards, mutated by the drift from nuclear testing back in the ’50s. Their teeth are as long as car keys, and they are notoriously short-tempered. In 1973, a group of Boy Scouts camping near…

OK, I made that stuff up. I thought it might be more interesting than the real answer, which is: Sort of. 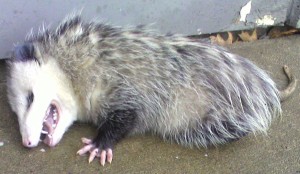 There are opossums in Arizona, although it is highly unlikely that the missus saw one in Mesa. Unlikely, but not impossible.

Arizona’s opossum population mostly confines itself to the area from Tucson south to the border. That’s fine with me. I think opossums are sort of creepy. I had a teacher once who looked like an opossum. She was creepy, too.

The only things I like about opossums are the names of all the different types—Central American wooly opossum, Alston’s mouse opossum, Virginia opossum and my favorite — Gray’s four-eyed opossum. I have no idea if it really has four eyes. I doubt it. It’s just a cool name.

Anyway, researchers used to think our opossums were ordinary opossums somehow transplanted from the East. (Who would drive an opossum to Arizona?) But it turns out they are a subspecies of Mexican opossums that has moved north and expanded its numbers during the wet years a couple decades ago. Mexican opossums have longer, darker tails than common opossums, in case you were wondering.

In the course of looking stuff up, I also came across some recipes for cooking opossum. As a public service, I will not be printing them here, and you may not call and ask for them. They’re enough to make you retch.