Rhino Beetles Found Only in Arizona

Excerpt from Valley 101: A Slightly Skewed Guide to Living in Arizona, a collection of Clay Thompson’s columns for The Arizona Republic. (Originally published July 28, 2002.)

Q: I have lived here all of my 32 years, and ever since I can remember, every summer at night, I see the biggest, ugliest and fiercest-looking brown beetle. The other night I saw one of these things and sprayed it with bug killer, which only seemed to disorient it. It took undiluted tick poison to kill it. What are these things?

A: You know, if I were rich, I would just buy you people bug books and let you figure these things out by yourselves. I usually just throw away the bug questions because they are usually pretty vague. Along the lines of “I saw a black bug. What was it?”

However, in this case, I’m just about 100 percent sure that this guy saw—and needlessly slaughtered—a rhinoceros beetle, Dynastes granti.

They are the largest North American beetles and are believed to be found only in Arizona. 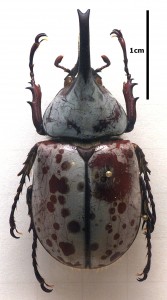 Like my masters, these things are pretty creepy, especially when they’re flying. And they hiss by rubbing their abdomen and wing covers together. The beetles, not my masters. My masters hiss the same way other people do.

Unlike my masters, rhinoceros beetles are not at all dangerous. Some people keep them as pets, although they are as ugly as the day is long. They’re usually brown, about 3.5 inches long, and the males have a big pair of horns protruding from their heads. They use them to fight with other males over babes.

The females lay eggs in decaying vegetable matter or stuff like that. When the larva is grown, it makes itself a little hole in the ground and lines it with feces, which dry and form a waterproof coating. The adults dig their way to the surface in a few weeks.

As noted, they are harmless, so there is no need to go dousing them with tick poison or whatever. You people.

They eat tree sap, although I’m told that people who keep them as pets give them peeled fruit and watered-down maple syrup.

The downside to the pet thing is that they only live about a year as adults. However, just like my masters, they breed easily in captivity.