CultureDose of HistoryValley of the Sun
Home›Culture›The Story of Carl Hayden: A New Breed of Frontier Lawman

The Story of Carl Hayden: A New Breed of Frontier Lawman

Excerpt from “In Old Arizona” by Marshall Trimble, the state’s official historian.

The Old West was still pretty new in 1877 when Carl Hayden was born. His birthplace was a mud adobe house on the south bank of the Salt River that is now Monti’s La Casa Vieja. The railroad linking Phoenix with the Southern Pacific transcontinen­tal line at Maricopa and the rest of the civilized world was still ten years away. Morris Goldwater had recently installed the region’s first telegrapher’s office in the family store in Phoenix. Young Carl’s father, Charles Trumbull Hayden, operated a flour mill and ferryboat business along the usually placid Salt River. The elder Hayden arrived in Arizona in 1858 on the first Butterfield-Overland stage to Tucson. Earlier, he had been a trader on the fabled Santa Fe Trail. By the time of Carl’s birth, he was one of the territory’s most prominent citizens. Two years after Carl was born, the small sun-baked Mexican village of San Pablo combined with Hayden’s Ferry to officially change the name to Tempe.

Tempe remained a peaceful community during Carl’s early years. It was described in 1888 as a town of “seven stores, three restaurants, four saloons, two hotels, two barber shops, one public hall and one butcher shop, along with 150 more or less scattered dwellings.” Through the efforts of his civic-minded father, the 1886 Territorial Legislature gave Tempe an appropria­tion to build a normal school.

Construction of the new institute was completed just in time for the opening of the fall semester when Mr. Hayden discovered a serious oversight. Carpenters had forgotten to build outdoor privies for students and faculty. Workers hastily erected the structures and classes opened on schedule.

Carl Hayden grew up with the territory. Being the son of a prosperous merchant and civil leader, he enjoyed the amenities available to young men in his station—school and a place in his father’s business. Like his father, Carl took a great deal of interest in civic responsibilities. In 1906 he threw his hat in the political ring, running for sheriff of Maricopa County. The quiet, soft-spoken, 30-year-old Tempe resident was elected. 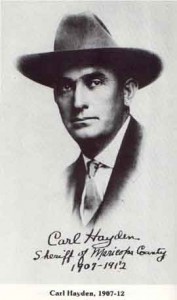 Phoenix, at that time, was a raw frontier town of some 10,000 residents, its unpaved streets a sea of mud during the rainy season, hot and dusty during the long, dry spells. Unlike most cities in the Rocky Mountain region of the West which rose and sometimes fell with mining booms, Phoenix, Scottsdale and Tempe owed their existence to agriculture. Farming towns have a tendency to be more peaceable; however, Maricopa County did generate enough excitement to keep lawmen busy even after the turn of the century.

The sheriff’s wages at that time depended on fees collected from the various brothels, gambling halls and saloons. Saturday was collection day and tradition dictated that the sheriff set up drinks for his constituents after collections. The freeloaders bellied up to the bar by the score and the sheriff often went home with empty pockets. Hayden, during his tenure, set a new precedent. He collected fees in the early morning hours, while the rounders were sleeping off the previous night’s imbibing.

Hayden also broke with tradition in that he preferred to go about his duties unarmed or, if he did carry his revolver, it was not loaded. He displayed a sensitivity not often seen in frontier peace officers towards condemned men and public hangings. He detested the idea of having to hang anybody, and it was largely through his efforts that all hangings in the territory were performed at the Yuma Territorial Prison. Previously, they had been the responsibility of the county sheriff.

In 1907, the same year Carl assumed office, the faro tables closed and the roulette wheels in Arizona spun for the last time. An anti-gambling law was passed making it a misdemeanor to engage in any banking or percentage game. That same year, a law banishing female singers and women from saloons became effective. The law stated that women couldn’t “sing, dance, recite, play upon any musical instrument, serve drinks or take part in any games, or loiter in any saloon, room or apartment adjacent to or opening from or connected with any saloon.” Anyone smart enough to find a way around that lengthy statute could have also figured out a legal loophole in the Ten Com­mandments.

Customarily, the Pima Indians east of Phoenix journeyed in on Saturday afternoons to sell their beautifully-woven baskets. The men wore nothing but breechcloths and a smile, something that didn’t set too well with some members of the fair sex. A delegation called on Sheriff Hayden to do something about the “indecency.” Carl calmly gathered several pairs of trousers and deposited them on the branches of a large mesquite on the outskirts of town and designated the site as the “pants tree.” The Pima men were most obliging and henceforth when coming to town they stopped at the tree and donned a pair of pants. Later that day, upon departing, they took off the pants and left them hanging in the tree so that others might share in their use.

That same group of busybodies who took offense at the wearing of breechcloths on the streets of Phoenix besieged the sheriff with yet another complaint. It seems that when the ladies of the town learned that the old chief of the Pimas had, not one, but three wives, they formed a committee and called upon Hayden to end this abominable situation. Carl Hayden recalled many years later his memorable visit with the Pima headman. “Under the white man’s law,” he explained, “you can only have one wife. Now you pick out the one wife you want to keep and then tell the other two that you don’t want them.” For several long minutes there was silence as the wise old man pondered the request. Finally, he looked up at the lawman and grunted, “You tell ’em.” The old man had bested him and Sheriff Hayden knew it. He got on his horse and rode back to town. As far as he was concerned, the matter was closed. 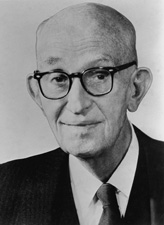 Carl Hayden is not usually listed among the famous peace officers in the state’s illustrious frontier history. He had no famous shooting scrapes like many of his better-known counterparts such as Buckey O’Neill, Wyatt Earp, Commodore P. Owens, John Slaughter and Jim Roberts. He lived quietly in Tempe with his pretty wife Nancy. Each morning after breakfast he kissed her good-bye, climbed aboard the westbound Phoenix and Eastern Railroad and rode into Phoenix. He might never have been well known outside Maricopa County had it not been for a couple of nefarious youngsters who decided to rob a train. His relentless pursuit and capture of the outlaws, in an automo­bile, was a first in Arizona history and certainly earns him a niche in the Valhalla of frontier peace officers.

It all happened back in 1910 when the Woodson brothers, later to be known as the “beardless boy bandits,” held up the passenger train between Maricopa and Phoenix. The lads had planned well, or so it seemed. They rented guns and horses in Phoenix, then rode to the Gila crossing, where they tied their mounts in some brush and walked into Maricopa, where they caught the northbound shuttle train. As the train approached the crossing, they brandished their revolvers, forcing the conductor to signal a halt. They next removed some $300 from the pockets of the passengers. After pistol whipping one of the victims, they jumped the train and escaped into the desert.

It was the first train robbery in Arizona in several years and caused quite a stir in Phoenix. Sheriff Hayden quickly raised a posse and headed south to the scene of the crime. They easily located the spot where the outlaws had staked out their horses. Fresh tracks indicated that the two were headed towards the Mexican border. Using Pima trackers to lead the way, Hayden sent the posse into the inhospitable Sonoran desert in pursuit of the fleeing bandits. Next, he sought J.F. McCarthy, the proprietor of a local hotel in Maricopa, who also owned a powerful $3,000 Stoddard-Dayton automobile. McCarthy consented to have his big car “drafted” in county service and agreed to act as chauffeur.

The two caught up with the posse in the middle of the afternoon. The hot, arid desert had taken its toll on both men and animals. Leaving most of the posse in the tiny Papago village of Cuckelbur, Hayden loaded a few deputies in the back seat of the vehicle and off they went bouncing across arroyos, speeding through cactus and greasewood. The trail through the desert was easy to follow as the brothers had made no serious attempt to cover their tracks. The youthful outlaws and their rented steeds had fared no better than the posse. Hot, exhausted, and out of water, they stopped in an arroyo to rest. They saw the great cloud of dust from the speeding automobile and thinking its occupants were miners, rushed out waving their arms. They got the surprise of their lives when out jumped several officers, their rifles cocked and ready. Upon looking into the barrels of several rifles pointed in their direction, one of the Woodsons thrust his hands in the air. The other was not quite so easy to subdue. He kept one hand in his pocket firmly gripping the handle of his rented revolver. ‘Throw up your hands or I’ll shoot,” one of the deputies shouted. Hayden, his pistol drawn, cautioned the deputy to go easy, and leveling his unloaded revolver and with a calm, steady voice called upon the lad to get his hands up. Deciding that discretion was better than valor, the outlaw raised his hands. The boys were shackled and returned to Phoenix amid much fanfare.

Carl Hayden’s fame as a cool and efficient lawman spread far and wide following the arrest of the Woodson brothers in 1910. This, no doubt, had much to do with his being elected the state’s first delegate to Congress two years later. He was later elected to the Senate where he served his native state and his country until retiring in 1969.

Carl Hayden was known among his colleagues as a “work horse,” in contrast to Washington’s many “show horses,” serving in Congress for more than 56 years, longer than any other. He became one of the most powerful politicians in America during his tenure. Still he remained a quiet, soft-spoken gentleman exempli­fying the kind of traits that helped tame the raw frontier—hard work, honest determination and self-reliance. During the Kennedy years, Time Magazine referred to Hayden as the “last link between the New Frontier and the real one.”

Carl Hayden was born in Arizona during a lawless and violent era of hostile Apaches, bandits and cattle rustlers. The gunfight at the OK Corral, the Geronimo Campaign, and the Pleasant Valley War all occurred during his youth. He saw a century die and another born; America at war in France; a great depression; then another World War. The realization of a dream came in the 1960s when Congress approved the Central Arizona Project. But perhaps most remarkable of all occurred three years before his death in 1972 when Carl Hayden turned on his television one July afternoon in 1969 and saw a man named Armstrong walk upon the moon.