At the peak of its prosperity, the fabled Bradshaw Moun­tains of central Arizona produced a king’s ransom in gold and silver. Towns and mines with picturesquely whimsical names like Bueno, Turkey Creek, Tiger, Tip Top, Oro Belle and Big Bug were peopled with boisterous devil-may-care miners aptly described as unmarried, unchurched and unwashed. Each community boasted it was built atop the madre del oro and its streets would soon be cobbled with golden nuggets.

In 1899, the vast riches inspired railroad entrepreneur Frank Murphy to extend his Prescott and Eastern Line fromMayer into the heart of the great mountains. Although Murphy was warned he’d be stopped by this maze of rugged, perpendicular grades laced with canyons so steep that big horn sheep had to shut their eyes and walk sideways, he was determined to meet the challenge of the mountains. That’s why it’s best-remembered as Frank Murphy’s Impossible Railroad.

This mighty railroad line wasn’t Murphy’s first challenge. A few years earlier, he built the famous Peavine from Ashfork to Phoenix, linking the capital city with the Santa Fe mainline in Northern Arizona. Later he ran a line from Prescott to Mayer. The mines in the Bradshaws were producing nearly $400,000 in gold and silver annually.

Because Murphy owned mining properties in the area, he was most anxious to extend his railroad from Mayer into the mountains. Actually, the plan was two-fold. One spur would run up Big Bug Creek, between Humboldt and Mayer, to Poland (town, not the country). The other would extend along the eastern side of the Bradshaws then climb the lofty summit to Crown King. In 1901, Murphy hired a band of strong-backed gandy dancers and steel-driving men back East and transported them out to Prescott. He paid them a dollar a day for their toil, twice the going rate. Even those top wages couldn’t prevent a mass exodus of hired hands after a dynamite blast on a cut exposed a rich vein of gold. Undaunted, Murphy shipped in another load of track layers and the steel ribbons continued to inch their way up the slopes towards Poland and the rich mines at Walker. 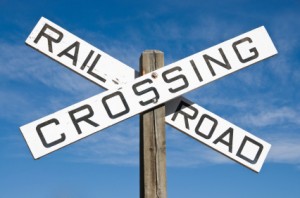 On April 21, 1902, the spur line finally reached Poland. Murphy’s gamble paid off immediately. Miners following a gold vein above Poland met another group tunneling from the other side of the mountain at Walker. The result was an 8,000-foot tunnel linking the Lynx-Walker District with the railroad at Poland. The first week, $180,000 in gold ore was hauled through the tunnel in mule-drawn ore cars to the railroad where it could be hauled to the smelter at Humboldt. Now Murphy turned his attention to the more difficult task of building a line from Mayer to Crown King.

The Crown King line stretched east from Mayer across the broad cattle country to Cordes before winding down Cedar Canyon and south into Crazy Basin. From there it was 13 treacherous miles and a 3,000-foot rise in elevation to Crown King. The grade was four percent and at Horsethief Canyon it took seven miles of track to go just two miles. The tracks had more kinks and lazy loops than a cheap lariat. On some of the tight switchbacks, the steam engine had to head up a short spur, then back uphill to the next hairpin turn before putting it in forward again.

In late October, 1903 an excursion train brought a party of Prescottonians up to behold the view. From atop the summit, they could see 50 miles off into the distance.

The new railroad brought civilization to Crown King. In its early days Crown King was pretty wild and woolly. The nearest lawman was at Prescott. Horsethief Basin, a lair for uncurried bands of outlaws during the turbulent 1880s, was a few miles south of town. Local legend has it that 17 men died with their boots on in the 1890s alone.

The years leading up to World War I were boomers for the railroad and mines in the Bradshaw Mountains, but by 1918 the ore was starting to play out and the line went into decline. The old iron-bellied locomotives, their boilers leaking steam, were hard-pressed to make the steep grade.

There’s an old saying, “When the gold runs out, so do the people,” and by the 1920s the impossible railroad went into decline. The last train pulled out of Crown King in November, 1926 and soon after the Santa Fe pulled up the rails. The old trestles were planked over for automobile traffic. Crown King became another of those “towns too tough to die” as Arizonans were beginning to take to the open road. It was ideally located high in the cool pines and air conditioning was still in the distant future. Phoenicians braved 29 miles of wash­board road to escape the searing summer heat.

During his illustrious career in the bustling Arizona territory, Murphy engaged in a host of activities. He was the first superintendent of the rich Congress Mine. He was associated with the purchase of the legendary United Verde Mine at Jerome in the 1880s and he once owned the famous Castle Hot Springs Resort. Noted for his integrity, resource­fulness and ability, Murphy attracted substantial Eastern capital to Arizona and was one of the territory’s most influ­ential businessmen.

Frank Murphy, the visionary who brought the impossible railroad to fruition continued his entrepreneurial efforts. He spent the last years of his life developing plans to build a railroad from Arizona across Mexico and down to the Panama Canal. He died in Prescott in 1917 after a long illness.