Who is Ol’ Bill Williams… as in Williams, AZ?

The picturesque town of Williams takes its name from Bill Williams Mountain that towers above and provides as beau­tiful high country setting for a community as can be found in America. It’s a fitting place-name for ol’ Bill Williams, the “greatest fur trapper of ’em all.”

Ol’ Bill was as colorful a man as any who ever forked a horse or mule and headed towards the setting sun. To those who knew the tireless old mountain man, he’d always seemed old and eccentric. His drunken sprees around Taos set the standard by which others tried to match but never could. Each season he rode alone into forbidding hostile Indian country and returned safely, his pack mules laden with precious beaver pelts.

Ol’ Bill was a tall, skinny, redhead, with a high-pitched voice, his body battle-scarred and worn. He was known to run all day with six traps on his back and never break into a sweat. He had a peculiar way of walking, it’s been described as more closely resembling a stagger, and he never walked in a straight line. He fired his long-barreled, “Kicking Betsy” with unerring accuracy in what was described as a “double wobble.” Ol’ Bill never drew a steady bead with the heavy rifle. He let it drift back and forth across the target and squeezed the trigger at “jest” the right moment. On horseback, he wore his stirrups so short his knees bobbed just beneath his chin. He leaned forward in the saddle resembling a hunchback on horseback.

All these eccentricities enhanced his reputation as one of the Old West’s most unforgettable characters. George Frederick Ruxton, an English adventurer who toured the West in the 1840s, wrote this colorful description of old Bill:

“Williams always rode ahead, his body bent over his saddlehorn, across which rested a long, heavy rifle, his keen gray eyes peering from under the slouched brim of a flexible felt-hat, black and shining with grease. His buck­skin hunting shirt, bedaubed until it had the appearance of polished leather, hung infolds over his bony carcass; his nether extremities being clothed in pantaloons of the same material… The old coon’s face was sharp and thin, a long nose and chin hob-nobbing each other; and his head was always bent forward giving him the appear­ance of being hump-backed. He appeared to look neither to the right nor left, but, in fact, his little twinkling eye was everywhere. He looked at no one he was addressing, always seeming to be thinking of something else than the subject of his discourse, speaking in a whining, thin, cracked voice . . . His character was well-known. Ac­quainted with every inch of the Far West, and with all the Indian tribes who inhabited it, he never failed to outwit his Red enemies, and generally made his appearance at the rendezvous, from his solitary expeditions, with galore of beaver when numerous bands of trappers dropped in on foot, having been despoiled of their packs and animals by the very Indians through the midst of whom old Williams had slipped.” 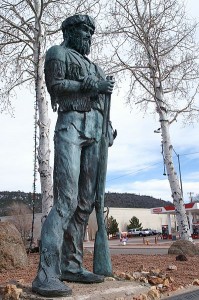 They called him Old Solitaire for his lonesome ways (Bill wasn’t that lonesome, he always seemed to have an Indian woman waiting somewhere). Fact is, he spoke several dia­lects and was more at home among the friendly tribes than he was with his own people. It was said he came West as a missionary to the Osage Indians, but they converted him. He took an Osage wife and after bearing two daughters, she died. So Bill headed for the mountains and became a trapper.

Bill had more lives than a cat, surviving one hair-raising adventure after another. His luck finally ran out after some 30 years in the wilds, when on March 14, 1849, a war party of Utes killed Bill and Dr. Ben Kern near the headwaters of the Rio Grande in southern Colorado.

Two years later, Richard Kern, a brother of Dr. Kern, was traveling with the Sitgreaves Expedition in Northern Arizona. Kern took copious notes of everything he saw and heard on the journey. During the trip Kern and guide, Antoine Leroux, applied the name Bill Williams to the 9,200 foot range. Later, the pair honored ol’ Bill again by giving his name to the river that headwaters near Hackberry. Later it was changed to Big Sandy. Today, the stream becomes the Bill Williams River after it joins the Santa Maria River near Alamo Lake on its journey to the Colorado River.

Like the Indians, with whom they sometimes lived with and sometimes fought, mountain men like ol’ Bill were “Nature’s Children.” They loved the outdoors, hated fences and restrictions, respected grizzlies and rivers and rode anything that “wore hair.”

Storing the knowledge of this vast terra incognita in their heads, they guided the storied Army Corps of Topographical Engineers on their historic surveys along the 32nd and 35th Parallels during the 1850s. These trails or paths later became the trails that led emigrants to the promised land in what has been called the greatest mass migration of greenhorns since the Children of Israel set out in search of Caanan.