Bill Downing was one of the most disliked fellows in old Arizona. He was moody, morose, bad-tempered, sullen and surly. That was when he was sober. He got downright mean and ugly when he was drinking ol’ red-eye.

He was so unpopular that even members of his gang couldn’t stand him. It’s a historical fact that one time when Bill and several other members of the Alvord gang were languishing in the Tombstone jail on a train robbery charge, a crony broke in and freed the other outlaws but left Bill locked in his cell.

He was so bad that the only thing good one could say about him was he wasn’t as despicable sometimes as he was usually.

If I seem to have painted ol’ Bill with a jaundiced brush, it’s because he likely would have wanted it that way. If he had any good qualities history has mislaid them like some old lost gold mine.

It’s been rumored Bill rode with the Sam Bass gang in his younger days. Somewhere along the way he married a young lady from a good family in Texas. She withered and died while he was in the Territorial Prison at Yuma serving time for robbing a train.

After Bill got out of prison in 1907 he returned to Willcox, one of his earlier haunts, and opened up a saloon called The Free and Easy. It soon became the hangout for all the nefarious scalawags in that part of Cochise County. Arizona law had banned women from “loitering” in saloons but that didn’t bother Bill. He employed an assortment of shady ladies to drink with the customers. The girls were highly skilled pickpockets, too. Victims were reluctant to complain be­cause of Bill’s reputation as a gunslinger. He boldly threat­ened the life of anyone who might cause him a return visit to the Yuma prison. The law was laying for a chance to arrest Bill but he had terrorized the folks in Willcox to such a degree that none would file charges. Bill’s downfall began the night he beat up one of the girls. When she complained to the local constable, Bud Snow, a warrant was issued. 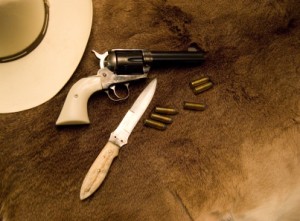 Now the best time to serve a warrant on a miscreant like Bill Downing is early morn’ before he’s had a chance to indulge more of the “hair of the dog that bit him.”

The constable enlisted Arizona Ranger, Billy Speed, in arresting Bill. On the morning of August 5, 1908 the two lawmen stood in front of The Free and Easy Saloon and called on Bill to step outside. The old outlaw ignored the first request, continuing to drink with a few other early morning imbibers. After the second demand Downing turned and headed for the back door. About that same time the Arizona Ranger, Billy Speed, armed with a 30-40 Winchester, headed around the side of the building. The two turned a corner at the same moment and faced each other in the classic Old West confrontation.

Bill Downing, a left-hander, reached for his left holster where his six-shooter was supposed to be stashed. At the same time the Ranger raised his Winchester and fired. Bill never got off a shot. The surprised desperado had reached in his pocket and came up empty. It seems that when he turned to leave the bar one of the patrons had picked Bill’s pocket. The notorious outlaw, who swore he’d never be taken, died empty-handed on the streets of Willcox. A coroner’s verdict ruled the killing justified while locals cheered Bill’s demise. Even in death nobody cared to say something nice about Bill Downing.

The incident was the inspiration for an axiom that still holds true in old Arizona—“don’t go fer yer six-shooter unless yer shore it’s there!”