Use Water Bags to Repel Flies

Excerpt from Valley 101: The Great Big Book of Life, a collection of Clay Thompson’s columns for The Arizona Republic. (Originally published August 11, 2001.)

Q: A couple of years ago we were sitting on our porch enjoying some beers, but not enjoying all the flies. A friend suggested hanging up plastic bags of water to repel the flies.We tried it, and it works, but we have never known why. What’s the deal?

A: My first thought was that this was just about the most cockamamie idea I had ever heard, but then I looked at my pay stub and decided the water-bags thing didn’t sound so weird after all.

Apparently there is something to this, but no one seems to know why. 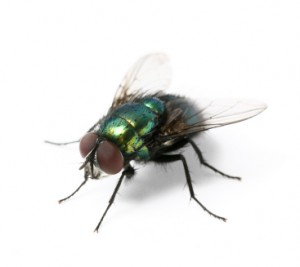 The idea is this: Fill a sandwich-size, zip-top plastic bag about half full of water. A couple of references I found said you should mix in a bit of vinegar, too.

Hang the bag up, either with good old duct tape or by poking a wire hanger through the top. Supposedly, this repels flies.

I don’t know this for sure, but I found a number of references that swore it works. I do know it does not work on my masters, but I have had some success in that area with those stop sticks the police put down to flatten the tires of cars they are chasing.

There are a couple of theories about why thewater-bag thing works. One holds that to flies the bags resemble hornets’ nests, and since hornets prey on flies, the pests steer clear.

Another explanation is that there is something about the way light reflects off the bags that somehow scares or confuses the fly. I know you can scare flies, but I don’t know how hard it is to confuse flies. I don’t recall ever having seen a confused fly.

Speaking of that, another reader wants to know: How can flies see anything if they have hundreds of eyes?How could their tiny fly brains process all those images?