Did you know the Valley is home to the world’s first wave pool? “Waikiki Beach” at Big Surf Waterpark in Tempe has welcomed desert beach bums for more than four decades.Today, it remains the third largest wave pool worldwide, containing some 2.5 million gallons of water. 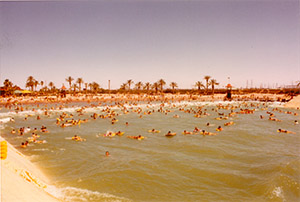 An Idea is Born

The wave pool is the brainchild of Phoenix construction engineer Phillip Dexter. Fascinated by surfers he saw on TV during the 60s, Dexter envisioned a surfing destination right here in the Valley of the Sun. Ironically, Dexter wasn’t a good surfer himself. Prior to embarking on this project, he had only seen the ocean a handful of times. First when deployed on a pocket carrier during World War II, the second in 1965 when serving a small stint as a construction engineer in California.

Despite his faulty sea legs, Dexter was committed to bringing the lifestyle to the barren desert. He started experimenting with wave making in his backyard. Then with the help of local investors in 1967, Dexter transitioned his small-scale science project to a wave-making laboratory in an old pool hall. Once he mastered making bigger waves, he sought bigger financial backing, eventually attracting corporate hair giant Clairol. Soon thereafter, Big Surf was born, opening its doors in 1969. 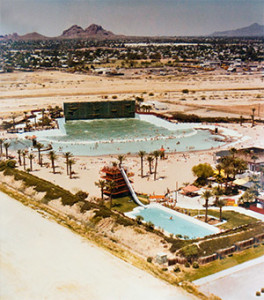 Clairol got cold feet following a few operational kinks in the early days, and in 1971, the park was bought out by Inland Oceans, LLC, which continues to operate the park to this day.

Big Surf flourished as a desert surfing destination throughout the 70s (pictured top) and 80s (pictured center). Sea lovers of all ages and abilities flocked to the oasis, and it quickly carved its niche in American pop culture. In 1976, a band called The Sunshine Factory even produced a song about the park called Big Surf Feelin’.

In the early 90s, new park managers put the brakes on surfing because of logistical issues, said Big Surf spokesman Jeff Golner. Nonetheless, the wave park continued to draw families, and new attractions were constructed such as the Kilauea Cove Slides, which were purchased from the Circus Circus Casino and Hotel in Las Vegas for a mere dollar. 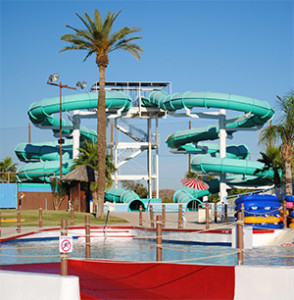 Kilauea Cove Slides at Big Surf were purchased for $1. Courtesy of Big Surf.

Now, Big Surf is attempting to reclaim some of its early glory. Starting today, the wave pool will be adjusted for surfing sessions from 5:30 to 6 p.m. (daily sessions start May 27). During this time, the normal 3-foot wave will climb to 5 feet. If turnout is big enough, the park will consider adding a morning surfing session as well.

“We really want to revive the water park’s early glory days,” said Golner. “We feel there is an audience for surfing, and we want new generations to experience this iconic park. There’s no other place like it. The history and amenities can’t be found anywhere else.”

Will you be hitting the Big Surf waves this summer? Did you visit the park in its early days? What was it like? Please leave us a comment. If you have pictures of the early days (and wouldn’t mind them being published), please email them to info@arizonaoddities.com.