Do Valley Homes Have Fewer Basements?

Excerpt from Valley 101: The Great Big Book of Life, a collection of Clay Thompson’s columns for The Arizona Republic. (Originally published May 30, 1999.)

A: First of all, your question is flawed by asserting there are no basements around here. Granted, there aren’t many, but there are some, especially in older homes. They’re relatively plentiful in the Encanto neighborhood of Phoenix and in some scattered pockets of pre-World War II homes around the Valley.

They’re not the pine-paneled rumpus-room basements you recall from your split level back in Moline, Ill., but they’re basements nonetheless. 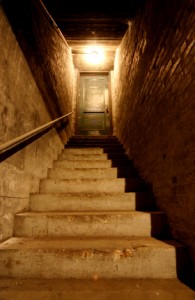 And, as we shall see, basements have made somewhat of a comeback in recent years in upper-end new housing.

But the vast majority of Phoenix-area houses are squatting on concrete slabs, meaning that if we ever really did have a tornado, your best bet would be a merciful God.

So, why no subterranean space?

“Because it’s cheaper to go up than it is to go down,” said Earl Gibbons, a soil specialist for Construction Inspection and Testing Co. in Phoenix.

It isn’t that the soil around here is necessarily too hard, Gibbons said. It’s just that the soil isn’t quite right. “We have sandy conditions in a lot of areas, and it’s hard to excavate sand because it keeps collapsing in,” he said.

And if it isn’t sand, it’s rock or clay, which tends to be very dry, leaving a lot of air pockets and making it hard to backfill.

In colder climes, builders are required to dig deep to get below the frost line. In the Valley, the frost line is something you get on your lip from drinking a Slurpee.

There are less tangible factors involved as well.

Do you have fond childhood memories of carefree hours wiled away playing hide-and-seek in your grandma’s basement?