How the Phoenix Area Nabbed the “Valley of the Sun” Nickname

Excerpt from Valley 101: A Slightly Skewed Guide to Living in Arizona, a collection of Clay Thompson’s columns for The Arizona Republic. (Originally published June 6, 1999.)

Q: Everybody refers to this area as the Valley. What exactly is the Valley the valley of?


A: This is a deeply troubling question because it actually required some work to nail down the answer.

The easy part first: This is the Valley of the Sun.

Valley of the Sun was a name cooked up in the 1930s to boost tourism. As these sorts of things go, it’s not bad — short, snappy, descriptive.

It’s definitely an improvement over “the Denver of the Southwest,” which is how the boosters touted Phoenix in the 1890s.

So Valley of the Sun works.

But because you cannot live in an advertising slogan, we don’t live in the Valley of the Sun. We live in the Salt River Valley.

This is where actual work came in. 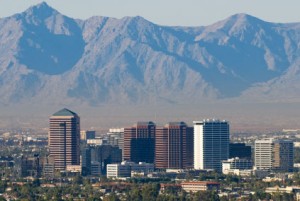 However, because we can’t base news stories on the opinions of the guy in the cubicle across the aisle, learned advice was sought.

Anthony Brazel, professor of geography at Arizona State University, maintains the valley of the Salt River is the watershed drained by said river — about 6,300 square miles. That’s a lot of valley.

You know that old saying: There’s never a fluvial geomorphologist around when you need one. Well, it’s not true. We found one right away — Will Graf, regents professor of geology at ASU. Fluvial geomorphology, in a nutshell, is the geology of rivers.

Technically, Graf said, Brazel is correct: The valley of the Salt River is that area drained by the Salt.

Then he said a lot of other stuff we didn’t understand before offering up this definition: The valley of the Salt could be considered that area in which fluvial materials — rocks or gravel or sand or whatever
deposited by the river over the centuries — cover the bedrock.

That area, Graf said, is roughly bounded by South Mountain, the north Scottsdale-Cave Creek area, Granite Reef Dam east of the Salt River Reservation, and the tiny town of Arlington, which is about 50
miles west of downtown Phoenix.

And it’s a broad, flat valley because, over the eons, the river wandered all over the place, depositing fluvial material willy-nilly.

Dig down anywhere in that area and you will be digging Salt River fluvial stuff for time immemorial. In some areas, it runs as deep at 15,000 feet, which is a lot of fluvial material.

So, there you have it, we live in the Valley of Salt River Fluvial Deposits, which isn’t as catchy as Valley of the Sun but still beats the Denver of the Southwest.