The Fourth Goes Bang in Taylor

TAYLOR — The people who reside in this community don’t have to worry about getting a wake-up call to make sure they don’t miss the Independence Day festivities. The Taylor Fire Department takes care of that. 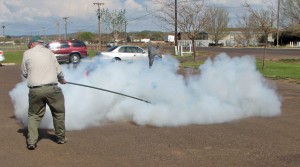 Starting at 4 a.m. every July 4, the department conducts an annual ritual known as “firing the anvil.” It’s a simple procedure — get an anvil and some gunpowder, stuff a bunch of gunpowder under the anvil, light the fuse and stand back. (The warning of “do not try this at home” should be obvious). The ensuing blast not only wakes up everyone within hearing distance, it also catapults the anvil several feet into the air.

The firemen repeat the process until everyone in Taylor is awake and ready to celebrate. And it doesn’t hurt the anvil.