Back in those halcyon days, when getting someplace was an adventure, daring drivers ran road races across the Arizona desert to promote the building of better highways. It’s hard to believe but as recently as 1929 Arizona had less than 300 miles of paved highways. In 1908 promoters began staging road races between Los Angeles and Phoenix. Billed as the Cactus Derby, they attracted such racing daredevils as the legendary Barney Oldfield, Olin Davis and Lewis Chevrolet. Drivers vied for a $2,500 prize and the title, Master Driver of the World.

The prize money wasn’t that important—they left more than $50,000 in auto parts scattered across the desert between Los Angeles and Phoenix. It was the lofty title they sought. 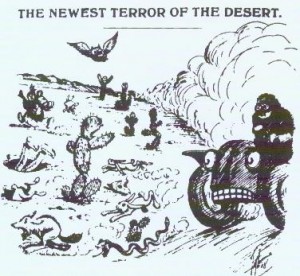 Cactus Derbies were staged from 1908 to 1914 and followed a variety of routes. One passed through Bars tow, Needles, Ashfork, then turned south to Prescott, Skull Val­ley, Wickenburg and Phoenix. Another went to Blythe, forded the Colorado River on a ferry, then on to Salome and Phoenix. An alternative route went from Palm Springs to Brawley and Yuma before heading for Phoenix, now billed as the Speed Capital of the World.

Keep in mind there weren’t any garages or service sta­tions on the 500-mile stretch of barren desert. Drivers strapped on spare parts and gas cans for the long journey. They raced against the clock so each evening the race ended in some town and the cars were impounded under guard in a local corral to keep mechanics from making repairs. The 1908 race was won by a steam-powered car (much to the chagrin of gas-powered enthusiasts) in the time of 30 hours and 36 minutes or an average speed of 17.6 mph. The most exciting race in the series was the last one held in 1914. Mack Sennet and his Keystone Kops couldn’t have done it any better.

The three-day race began in Los Angeles in a driving rain. Spectators, promoters and boosters traveling by rail, on the Howdy Special, rode along to enjoy the spectacle. Each night, boosters wearing colorful costumes of red and black along with a cap with the word, Howdy, emblazoned across the front, took possession of the town, partying until the wee hours then re-boarding their train to the next overnight stop.

East of Needles, the drivers used the Santa Fe railroad bridge to cross the Colorado River. Planks had been spread across the ties and any driver who slipped off was guaranteed a rough ride, not to mention a bent rim and flat tires. Lewis Chevrolet missed the planks and nearly destroyed his auto before reaching the other side.

Near Kingman, Bill Carlson’s Maxwell broke down. He walked into town for spare parts and when he returned, thieves had stripped his auto. (Some things never change).

Chevrolet, driving (you guessed it) a Chevrolet, after a harrowing ride across the Colorado that nearly took him out of the race, was done in by a overly helpful sheepherder at Seligman. Drivers used the same type cans for gasoline as they did for water. When he stopped to gas up, the friendly herder offered to help. Unwittingly, he filled the gas tank with water. 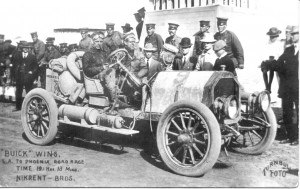 Olin Davis went out of the race when his car did a swan dive off a mountain road in Copper Basin, south of Prescott.

The redoubtable, cigar-chomping Barney Oldfield in his mud splattered white Stutz Bearcat raced into the fair­grounds at Phoenix in a cloud of dust to finish first. He almost didn’t make it though, as his engine flooded crossing New River and he had to hire a team of mules to pull him out.

Bill Bramlet and his Cadillac provided the most dramatic finish. Had there been a prize for perseverance, he’d have won hands down. Bill rolled his car down a steep hill outside Prescott. Fortunately, the car landed upright. Near Wickenburg he got stuck in quicksand; and, just outside Glendale he slid into a fence and broke his steering mecha­nism. The resourceful driver grabbed a couple of fence posts and tied them to the front wheels. By pulling the posts in unison, he managed to steer the car down Grand Avenue to the fairgrounds for a 5th-place finish. Out of 20 entries, only seven finished the 696-mile race.

That night, a gala celebration was held in the Adams Hotel. Barney Oldfield was awarded the diamond-studded medal proclaiming him, Master Driver of the World, and optimists speculated that one day the automobile would pass from the hands of the professional drivers and the novelty of the upper classes to an essential fixture in the lives of the common folk.