A Two-House Story in Snowflake

SNOWFLAKE — This is a two-house story, rather than the usual two-story house. It begins in 1878, when Andrew Rogers built a simple one-room log cabin for his family after they migrated to northeastern Arizona. As the family grew, Rogers added more rooms. In fact, he added so many new rooms that they swallowed up the original structure. After a while, all mention and memory of the cabin disappeared. 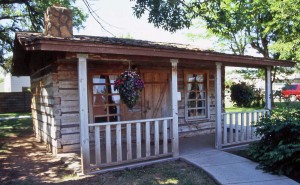 It stayed that way until 1989, when the house of many add-ons caught fire. While clearing the debris after the blaze was extinguished, workmen discovered the cabin standing among the ashes. Protected by all the additions, the thick logs had withstood the flames.

The City of Snowflake recognized the cabin as a valuable piece of local history and had it moved to a new location at First West and Center Streets. Volunteers gave it a new roof and porch, then stocked it with period furnishings and opened it to the public at certain hours. For more information, visit www.ci.snowflake.az.