Ever since man first set foot in this rugged piece of terrain known as Arizona, he has felt compelled to brand everything with a name. Inspiration for these place names came from a variety of sources—some quite obvious.

Lousy Gulch got its name after all the residents got lice. When Mormon pioneers decided to settle near a large stand of Ponderosa pines, they simply named their community Pine. Another group settled in a small valley where they found wild strawberries growing in abundance and decided to name their town Strawberry. Henry Clifton, a member of an early Indian-fighting militia, claimed that in 1864 the place was known as Wah-poo-eta for a prominent Tonto Apache chief better known to whites as Big Rump. The most obvious place name in Mogollon Rim country was bestowed when a group of settlers pulled into a little green valley and promptly named it Little Green Valley. 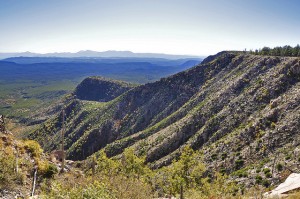 Sometimes names get changed in the process. Star Valley was named for old John Starr, who moved to Arizona from Oregon with his Indian wife in 1877. Apparently, the extra “r” got lost somewhere along the way.

I reckon people have been the source for most of the place names in the Rim Country. The name Mogollon is not Indian as often presumed, but comes from Juan Ignacio Flores Mogollon, governor of the Spanish province of New Mexico in the early 1700s.

Payson, the largest town in these parts, was named for Senator Louis Payson, who helped establish a post office here in 1884. Earlier names included, Long Valley, Big Valley, Green Valley and Union Park. In 1882 the first building, a stockade, was created. This historic site was located on what is today the fifth green of the Payson golf course.

Houston Mesa was named for Sam and Andrew Houston, who ran cattle here in the 1880s. Sam was killed in a freak accident. He got off his horse to tighten the cinch and flipped the stirrup over the saddle. His pistol was in a holster tied to the saddle horn, and the stirrup struck the hammer causing it to discharge. The bullet hit Sam in the leg and he bled to death before he could get to a doctor.

During the early 1880s, Isadore Christopher located the CI Ranch on the creek that bears his name. The ranch became the target of frequent attacks by Apaches. The war parties kept burning his place, but the stubborn rancher continued to rebuild. One day in 1882, he killed a large bear and nailed the hide on the side of his barn to dry. He was out hunting a few days later when a band of marauding Apaches rode in and set fire to the place. Army troops arrived on the scene and drove off the war party. When the soldiers saw that bear hide among the charred ruins of the barn they thought it was poor ol’ Christopher. Legend has it they held a solemn funeral and buried the bearskin. It was such a touching funeral Christopher hated to have to break the news that his death, like Mark Twain’s, was a bit exaggerated.

One of the most important military roads during the Apache Wars was the Crook Trail along the Mogollon Rim from Fort Verde to Camp Apache. The road was used primarily in the 1870s before the arrival of the railroad, but wagon ruts, and blaze marks on the ancient pine trees, are still visible in some sections today. Martha Summerhayes, a young army bride, rode in an ambulance supply wagon over that precipitous trail in 1874.

Martha had a proper New England upbringing and found it hard to adjust to the coarse language used by the teamsters to coax their animals up the steep grade. She wrote:

Each mule got its share of dreadful curses. I had never heard or conceived of any oaths such like those. They made my blood fairly curdle . . . The shivers ran up and down my back, and I half expected to see those teamsters struck down by the hand of the Almighty . . . Each teamster had his own particular variety of oaths, each mule had a feminine name, and this brought the swearing down to a sort of personal basis.

Afterwards Mrs. Summerhayes had become something of a convert.

By the time we had crossed the great Mogollon Mesa, I had become accustomed to those dreadful oaths, and learned to admire the skill, persistency and endurance shown by those rough teamsters. I actually got so far as to believe what Jack (her husband) told me about the swearing being necessary, for I saw impossible feats performed by the combination.

Anyone who’s ever spit tobacco juice on a mule’s behind from the seat of a wagon could have told her so.

The Rim Country’s most suitable place name was in­spired by a card game in 1875 between two old settlers, Marion Clark and Corydon E. Cooley. The pair decided they were living too close together and one should move. They agreed to settle the matter with a game of cards called Seven Up. On the last hand Cooley needed only a point to win. “If you can show low, you win,” Clark said. Cooley drew the deuce of clubs.