Located at the heart of the Phoenix Mountain Preserve and Dreamy Draw Recreation Area, Piestewa Peak serves as a prominent landmark along State Route 51, just minutes northeast of downtown Phoenix. The summit of this 2,608-foot peak offers 360-degree views of the Valley. 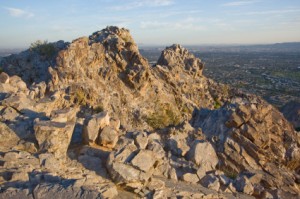 Now encased by cityscape and a smattering of lavish homes, the area surrounding Piestewa Peak was once a center for mining and grazing around Phoenix. The city took possession in 1959, and it later became a local hub for day hiking and recreation.

The summit trail is one of the most popular hikes in all of Arizona – and even the nation. According to the City of Phoenix, the trail receives 4,000 to 10,000 hikers per week.

From about 1910 through the early 21st century, the Phoenix landmark was known as Squaw Peak. The term “squaw” is considered derogatory to many, and numerous attempts were made throughout the years to change the name.

In 2003, the latest attempt was quickly passed. The mountain was renamed Piestewa Peak in memory of Lori Piestewa, an Arizona soldier who died during Operation Iraqi Freedom. She was the first Native American woman to die in combat while serving the U.S. military, and she was also good friends with Jessica Lynch, a well-known prisoner of war.

The summit trail spans 1.2 miles. The first half is steep and riddled with some loose rock, yet it’s still appropriate for hikers of all levels. Benches dot the apex of several zigzags along the trail, offering scenic viewing spots during breaks.

After the midway point, the trail becomes steeper, similar to that of a staircase. Many people seeking a lighter hike turn around before reaching the top. More experienced hikers kick up the pace as the summit nears. It takes most hikers between 30 and 60 minutes to complete.

Hikers encounter diverse plant and wildlife. Numerous cactus varieties and flora typical of the Sonoran Desert line the trail, such as palo verdes, creosote and brittlebrush. Horned lizards, chuckwalla, snakes and rabbits also thrive in the area. There are more than 50 species of birds in the region.

Those who summit are rewarded with expansive views. Hikers often collect at the tip, which is among the highest points in Phoenix. Numerous landmarks are within view, including the towering buildings of downtown to nearby Camelback Mountain.