The Facts on Aridity, Humidity

Excerpt from Valley 101: The Great Big Book of Life, a collection of Clay Thompson’s columns for The Arizona Republic. (Originally published April 13, 2001.)

Q: The other day when it was raining, it made me wonder about this: Is it possible to have more than 100 percent humidity or less than zero percent? My husband thinks I am odd.

A: He may be right. I don’t know. If he is just basing that on your question, you probably aren’t all that odd, but there may be other factors involved, such as manner of dress, eating habits or the like. 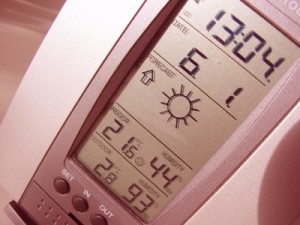 Ergo, hence and ipso facto, it would also seem to be impossible to have more than 100 percent relative humidity, but it turns out that’s not true. This I learned from Randy Cerveny, an associate professor of geography at Arizona State University and the King of the Weather Wonks.

It turns out that you can have more than 100 percent relative humidity, although it is very rare.

According to Cerveny, it is called “supersaturation” and occurs in very cold conditions. “The amount of water you can have in the air is a function of temperature. That’s the whole concept of relative humidity—the relative is the temperature,” he said.

Cold air can’t hold as much water vapor as warm air. At 5 degrees Fahrenheit, a cubic yard of air is saturated by 0.07 cubic inches of water. At 68 degrees, that same amount of air and water has a relative humidity of 9 percent. I looked it up. For supersaturation, you need temperatures of 30 or 40 below zero and very small water particles, so small as to be submicroscopic.

Under those conditions, the particles might be so small that they exist in the air without leaking out as moisture. If there are enough of them packed in there, the relative humidity can exceed 100 percent.

Does this make sense to you? Me neither, but that’s what the man said.