The Titan That Never Clashed

SAHUARITA — The Titan Missile Museum here isn’t really scary like a haunted house, but when you stop to consider the damage that one of those things could have done, it goes way beyond frightening. 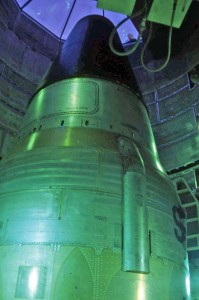 During the Cold War, several Titan missiles armed with nuclear warheads were planted in deep holes and aimed at the Soviet Union as a matter of precautionary defense. None were ever fired, so nobody knows for certain what the consequences would have been. The site/museum here was originally known as Site 571-7, and was one of 54 sites in three states to be spared after nuclear disarmament treaties were signed. Now the complex is a museum that reflects on  something that never happened.

Visitors take 55 steps down to the launch site 30 feet below ground and watch a simulated countdown procedure. Then they’re free to wander around in an area originally designed to either start or prevent a nuclear war.

So it’s okay to poke around but don’t go pushing any buttons because, well, you just never know.

To reach the museum, take Exit 69 west off Interstate 19 and follow the signs. There’s an admission fee.