FLORENCE — All four faces of the clock on the old Pinal County Courthouse say 11:44 regardless of what time of day it is. This is a good thing because most people look at the clock during the daylight hours, so no matter what time it is, the clock says it’s almost time for lunch. 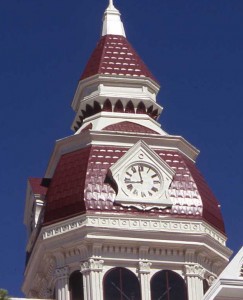 The clock has been stuck at 11:44 ever since the building opened in 1891, and it will always be 11:44 because the hands never move. This is because they’re painted on. It was originally an economic move, but now it’s tradition. There has never been a real clock in the tower. The architect wanted one, and that’s why the tower was erected. But the county supervisors at the time considered it frivolous waste of taxpayer money so they wouldn’t approve the funding. As a result, the hands were painted on a tin clock face and it’s been that way for more than a century.

Anyone who wants to see what time looks like when it’s standing still will find the courthouse at 135 North Pinal Street.