What’s With All the Cockroaches in the Valley? (And How to Get Rid of Them)

Excerpt from Valley 101: A Slightly Skewed Guide to Living in Arizona, a collection of Clay Thompson’s columns for The Arizona Republic. (Originally published August 1, 1999.)

Q: We thought we left cockroaches behind in Chicago. Instead, we find they’re huge out here. My wife is completely freaked.

A: Oh, yeah, and you’re not freaked? Perhaps no crawly thing, aside from the Legislature, invokes more horror and disgust than a big old sewer roach skittering around your bathtub or grazing on a box of saltines in the cupboard. Or coming at you across the sheets.

Roaches. We hate ’em. God probably had some good reason when he created them, but it’s a mystery to mortals.

Perhaps it was to keep us humble. Scientists have said their survivability is such that, in the event of a nuclear holocaust, roaches would dominate the charred new world. This raises an interesting question:
If we wiped out our world with nuclear bombs and only roaches survived and evolved, would there be, in a gazillion or so years, a roach Jerry Springer Show?

Anyway, we’re infested with three kinds here in the Valley and, reflecting our diversity, they are the German roach, the Turkestan roach and the good old American roach. 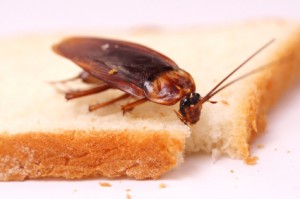 The small German model is most likely to take up permanent residence in your house. They like kitchens, especially the insides of electrical appliances. They can fly but prefer to scurry.

The big ugly suckers you’re seeing are the Turkestan and the American. They’re gross and are lumped together under the term “sewer roach,” but only the American is usually found in sewers. It can be hard to tell an American from the Turkestan if you already whomped it with a Size 12 Florsheim.

However, in its pre-whomped state, the Turkestan roach is about an inch long, brown to black, and it actually prefers the out-of-doors. If it is inside, like any roach, it’s going to want a drink and will likely
end up in or near a sink or tub.

The American roach runs up to about 2 inches, is shiny and brown and sometimes flies. Ayaaaaaa!

The American roach, according to Insects of the Southwest, by FloydWerner and CarlOlson, was once nominated as the official U.S. insect but was rejected by the Entomological Society of the United States in favor of the monarch butterfly.

Just think, if roaches had become the official national bug, they might have become a flash point for protesters, and we might now be debating a constitutional amendment to outlaw the burning of an
American roach or whomping it with footwear.

Yes, the American roach dwells in sewers. (A city employee once told us it looks like the walls are moving. Euuuu!) Contrary to what some think, however, they don’t swim up the pipes into your home.
It is theoretically possible, because roaches can swim (and survive on wallpaper glue and, in some countries, vote). But roaches are most likely to enter your house through openings around pipes or wires, under loose weather-stripping, through pet doors, or any other opening that presents itself.

We say hanging’s too good for them, plus they reproduce faster than you can tie the nooses. The Florsheim approach can be viscerally satisfying, but you have to find them before you can whomp them.

Roaches are nocturnal, so the best hunting is at night.

We once read that if you spray roaches with dish detergent, it eats away at some sort of protective outer skeleton and leaves the roach to die a lingering, awful death. It’s a nice thought, but chasing a roach with a bottle of Palmolive is time-consuming, messy and undignified.

Geckos, those little lizards you see on fences and outside walls, are said to be hell on roaches. But trading bugs for lizards isn’t everybody’s idea of victory.

Cleanliness is next to roachlessness. Keep your cupboards and counter tops free of crumbs, keep food containers sealed shut. Don’t leave pet food out in the open unnecessarily. You know what they feed roaches in research facilities? Dry dog food.

Plug up any openings around pipes or wires, inside and outside.

Most Valley cities will dispatch a crew to dust manhole covers in your neighborhood for roaches. Look in your city’s listings in the Blue Pages, usually under the sewer department.

Boric acid is a good deterrent, but if you’re going the do-it-yourself extermination route, be sure to read all the warnings on the label.

Your best bet is probably regular visits by a good exterminator.

Roaches—spray ’em, gas ’em, starve ’em, whomp ’em. Show no mercy. In a gazillion years, they’d do the same to you.

Excerpt from Valley 101: A Slightly Skewed Guide to Living in Arizona, a collection of Clay Thompson’s columns for The Arizona Republic. (Originally published August 1, 1999.)