IN THE DESERT — Anyone who has ever wandered into an Arizona desert has undoubtedly encountered the rather plentiful, but inconspicuous, plant known as the creosote bush. They’re not much to look at — spindly shrubs that stand anywhere from three to six feet tall and measure about two to 10 feet across. The stems carry small resinous leaves and, in the spring, they bear little yellow flowers. But that undistinguished exterior conceals a long-living plant with deadly instincts. 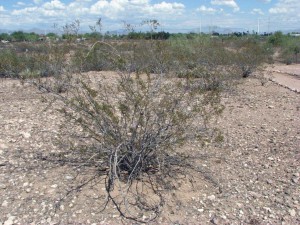 Although the bushes grow in somewhat orderly patterns across the desert, much like manmade orchards, there’s a reason for the spacing. For a long time, botanists thought it was because the creosotes has the ability to grow poisonous shoots that killed any plant that took root in its territory. They do have some ability in that area by producing chemicals that inhibit the growth of certain other plants. But now scientists believe that the root systems of the mature creosote bushes are so efficient at absorbing water that there’s none left for any other seeds, so they can’t germinate. Either way, nobody messes with the creosotes when it comes to protecting their territory.

Two other things about the creosote bush. First, they can live a long time. One grouping in the Mohave Desert of California has been around for an estimated 11,700 years. Second, despite the name, they don’t produce the creosote used to preserve railroad ties. That smelly stuff comes from a certain variety of pine tree.