The genesis of Galeyville, on the eastern side of the Chiricahua Mountains, was similar to many other short-lived boom towns in Cochise County.

In this case, it all started in 1880 when John Galey arrived from Pennsylvania to promote a silver mine. Since the prospect was only 60 miles, as the crow flies, from Tombstone’s bonanza, Galey visualized himself as the next silver king of Arizona. He secured some financial backing and laid out a townsite. Before long, Galeyville boasted 11 saloons and some 30 other various and sundry enterprises.

The boom lasted only about a year. The silver played out and Galeyville became another metropolis that didn’t quite metropolis. The story of old Galeyville might have ended right there, had not a pack of outlaws led by Curly Bill Brocius decided to take up residence.

Curly Bill, whose real name was William Brocius Gra­ham, was the bandit chieftain in these parts. He wore a white hat that contrasted sharply with his dark curly hair, black eyes and swarthy complexion. The boisterous, devil-may-care reprobate was considered a popular, swashbuckling figure by friend and foe alike, and nobody disputed his reputation as outlaw king of Galeyville, or the whole of Cochise County for that matter. 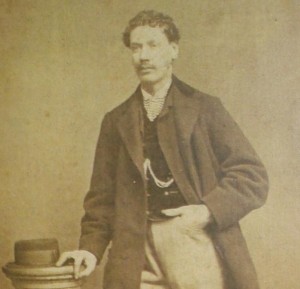 Curly Bill, who was given the nickname by a dark-eyed senorita from Mexico, didn’t discriminate. He robbed Mexi­cans and Anglos with equal enthusiasm. It’s been said the gregarious outlaw was some kind of frontier Robin Hood who stole only from the rich. If Curly Bill stole only from the rich, it was because there was no profit in stealing from the poor. His targets included trains, stage coaches and borderland smugglers. His favorite enterprise was cattle rustling. In those days, the U.S. Army was paying hard cash for beef on the hoof and nobody bothered to inspect the brands.

Curly Bill had a loose-knit partnership with Cochise County’s unscrupulous sheriff, Johnny Behan. Behan con­veniently looked the other way when Brocius pulled his capers; and when the sheriff s tax collector, Billy Breakenridge, came to Galeyville, the outlaw helped take up a collection from locals.

This unholy alliance almost got Curly Bill planted in six feet of Galeyville sod. When a tough outlaw from the Pecos River Country named Jim Wallace rode into town looking for a job, Curly Bill brought him into the gang.

Wallace claimed he rode with Billy the Kid in the Lincoln County War and had no love for lawmen. He declared they were about as welcome in his camp as a sheepman at a cattlemen’s convention. When Billy Breakenridge arrived to collect taxes, Wallace took one jaundiced look at the deputy’s badge, started making some threatening remarks and then drew his six-gun.

Curly Bill stepped in and ordered Wallace to holster his shootin’ iron and apologize.

“No Lincoln County hoss thief can come in here and abuse Billy,” he warned, “Breakenridge is our deputy and that suits us.”

For a spell, it looked like the matter was settled. The three went into the nearest saloon and shared a bottle of ol’ tanglefoot whiskey.

After a few drinks, however, Curly Bill got surly. Sud­denly, he jerked his six-shooter and threatened to plug Wallace. Bloodshed was avoided when several of the boys separated the pair.

Wallace stomped out of the saloon, went to the stable, and got his horse. He rode back up the street, dismounted, and waited outside the saloon for Curly Bill. When Brocius stepped through the swinging doors and saw what was happening, he went for his gun. Wallace had already drawn his and had it resting on his horse’s neck. A shot rang out, and Curly Bill went down with a bullet hole clean through his cheek.

Several members of Bill’s gang grabbed Wallace and started to string him up; but when it looked like Curly Bill was going to survive, they let him go. Bill lost a couple of teeth, and had to spend the next few weeks with an awkward bandage tied around his head to keep the jaw in place. Otherwise he was no worse for wear.

Curly Bill figured prominently in many of the nefarious doings along the Mexican border in the early 1880s. He was personally responsible for rustling thousands of Mexican longhorns, and earned the dubious distinction of having his name mentioned in a number of warm-worded diplomatic notes exchanged between the U.S. and Mexico.

The outlaw’s undoing came in the spring of 1882 when he mixed it up with the Earp brothers and Doc Holliday at Mescal Springs. Wyatt Earp claimed that, during an ex­change of shots, he downed the outlaw chief with a blast from his twin-barreled scattergun. Curly Bill’s cronies always insisted their leader was never at Mescal Springs, but was in Mexico with his sweetheart at the time.

There was so much controversy over the matter that a Tombstone newspaper, friendly to Curly Bill’s wild bunch, offered a thousand-dollar reward to anyone who could pro­duce the corpse of Curly Bill. The other Tombstone paper, siding with Wyatt, countered by offering a thousand dollars for the live body of Curly Bill. Neither side ever collected.