Sharlot Hall All Gussied Up in Copper

PRESCOTT — Copper has been an important element in Arizona’s history for more than a century, but it usually goes into the creation of such utilitarian items as tubing, electrical wiring and computer parts. 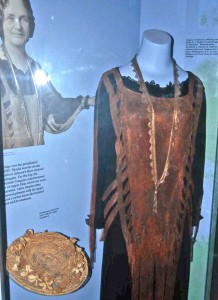 However, it took a different form in 1923, when Sharlot Hall went to Washington, D.C., wearing a copper dress.

Hall, a longtime Arizona activist and historian, was selected to deliver Arizona’s three electoral votes for Calvin Coolidge. Prior to her trip, the Arizona Industrial Congress commissioned an overdress made of copper links, and Hall wore it to the presidential inauguration. After returning to Prescott, she frequently appeared in the garment, along with copper accessories and a hat made of cactus, at public functions.

The dress, which weighs nine pounds, is on permanent display at the Sharlot Hall Museum in downtown Prescott. Nobody wears it anymore.