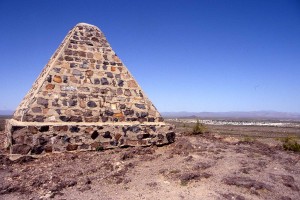 FLORENCE — A pyramid of mortared cobblestones sits atop Poston’s Butte just south of Florence. It was built in memory of Charles Poston, a freethinker often called “the Father of Arizona.”

Poston was appointed as one of Arizona’s first members of Congress and was politically influential in the state’s early years. He lost the following election and returned to Arizona to serve in a variety of political offices. But his popularity declined when he proposed building a temple to worship the sun. He was poverty-stricken when he died in 1902. His body was initially interred in a paupers’ field in Phoenix, then was reburied under the pyramid on the site of his proposed temple.