Another Arizona character who delighted locals and visitors alike was John Hance. In the old days they used to say that anyone who visited the Grand Canyon and didn’t meet Captain John Hance had missed half the show. For some 20 years, Cap Hance provided lying and lodging for the tourists. His brand of humor was a windy nature. The dudes never knew just how much of Cap’s stories to believe, for he always led them down the paths of plausibility until they found they’d reached conclusions that were impossible—or were they?

Like the time he was riding his favorite white horse, Darby, near Red Butte along the Canyon’s South Rim. (He gave all his mounts the same name—claimed it made it easier to remember what to call them.) Now old Darby could smell hostile Indians 40 miles away, and when he started tossing and snorting, Cap grew wary.

Pretty soon, he saw a bunch of warriors riding hard from the south. Cap put the spurs to Darby and they turned east only to find another painted-up war party coming from that direction. 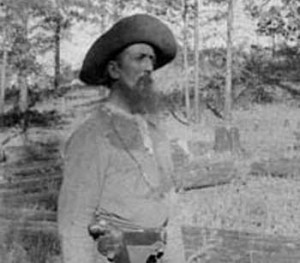 Darby set up and turned the other way, but another band was whooping it up in the west. Cap Hance and Darby knew that their only way out was to jump the Canyon. They didn’t have a minute to waste. Old Darby took a running start and gave a mighty leap. Up and over the Canyon they soared. About half way across, Cap let his eyes drift downward. Several thousand feet below, the mighty Colorado looked like a tiny reddish-brown ribbon twisting and winding between the steep canyon walls.

Old Darby got curious, too, and looked down. That brief glance caused him to lose his concentration, and they began to fall. Down they went like an elevator gone berserk. The canyon walls were sliding by in a blur as Cap and Darby gathered speed on the descent.

Cap knew the only way the pair could survive the fall was to pull up on old Darby. He’d trained that horse since he was a colt, and everyone agreed Darby was the best reined horse in Arizona—or the whole West for that matter.

Cap took a firm grip on those leather reins and hollered, “Whoa, Darby!”

Well, old Darby responded to his master’s command and pulled up short—just two feet from the canyon floor.

Hance and Darby glided safely down those last two feet. Captain Hance (nobody knows why they called him Captain-it just seemed to fit) came to the Grand Canyon in the 1880s to go prospecting. Whatever luck he had as an argonaut was far out-shadowed by his success as a story­teller and trail guide for tourists visiting the Grand Canyon in the days before the arrival of the railroad.

Captain Hance’s career as a yarnspinner was launched one day when he was lecturing to a group of tourists. He’d lost part of his index finger in an accident and a lady tourist asked, “Why, Captain Hance, how did you lose the tip of your fingers?”

Cap paused and stared at the missing part of his finger as if noticing it for the first time, then replied, “Why, ma’am, I reckon I plumb wore off the end of that thing pointing out the purty scenery out here over the past 30 years.”

The audience loved it, and from that day forth Cap Hance’s reputation as a windjammer grew. Visitors who didn’t get a chance to be victimized by his windies felt shortchanged. Next to the canyon itself, Cap was the main attraction.

Sometimes Cap Hance’s whoppers almost got him in a heap of trouble. Like the time a stranger asked him how the deer hunting was around the South Rim.

“Why, shucks,” Cap replied, “I went out this morning and killed three all by myself.”

“That’s wonderful,” the stranger exclaimed. “Do you know who I am?”

Undaunted, the captain snorted, “And do you know who I am?” “No, I don’t,” the game warden said

During inclement weather, a layer of dense fog some­times fills the canyon from rim to rim. Gap used to tell of the times when he and Darby rode across the fog bank to the North Rim. On one occasion, when they were about midway, the fog began to lift. Old Darby hurriedly jumped from one patch to another trying to reach the rim, but soon ran out of fog, slipped, through a hole, and landed on top of Zoroaster Temple. Cap and Darby were marooned out on that rocky monolith for four weeks before another blanket of fog covered the Canyon. “It was a light fog,” he later recalled, “but by then old Darby and me were a whole lot lighter, too.”

Perhaps Cap Hance’s greatest saga concerned a band of hard-bitten rustlers who stole his team of prize mules. The matched set of long-eared critters was Cap’s pride. There wasn’t anything the mules wouldn’t do for him. Naturally, he was heartsick when he went out to the corral one morning and found them missing. He saddled up old Darby and rode out to pick up the trail. The outlaws had set a path toward Ashfork, down on the Santa Fe main line about 60 miles south of the Canyon.

About sundown of the third day, Cap’s keen senses picked up the smell of meat cooking over hot coals. He got off Darby and crawled over a rise for a look-see. Nestled in a thick juniper grove was an old barn. The outlaws, unaware they were being followed, had stopped to eat.

Cap’s joy at catching up with the rustlers quickly turned to sorrow when he saw the hides of his prize mules nailed to the wall of the barn. Why, that pack of rascals had skinned his pets and were sitting around the fire getting ready to eat them!

There were five of the outlaws. All were well armed; and the meanest looking scalawags you ever saw. Cap not only felt it was his duty to capture that wild bunch but also figured he owed it to his poor mules to avenge their demise!

This called for some mighty fast thinking, and Cap rose to the occasion. He waited patiently for the rustlers to fill their mouths with mule meat, then, just as they were swallowing, he hollered, “Whoa, mule!”

And would you believe it? Those obedient mules heard their master’s call and stopped right in their tracks.

While those outlaws were squirming on the ground trying to clear their clogged throats, Cap Hance walked into camp and disarmed the whole bunch.

Captain Hance gained his reputation as a master of the art of pulling legs attached to tender feet and Dick Wick Hall won renown for his dry Arizona humor. Both were characters inspired by tourists.