How to Keep Javelinas Away from Your Yard

Excerpt from Valley 101: The Great Big Book of Life, a collection of Clay Thompson’s columns for The Arizona Republic. (Originally published September 7, 2001.)

Q: We have a herd of javelinas that have decided to come down to a common area in our neighborhood directly behind our house and use it for a latrine. If you’ve never smelled javelina poop, it’s something else. Is there anything that will repel these creatures? I tried mothballs already.

A: Thank you for sharing your thoughts about javelina poop. I really wasn’t hungry for lunch anyway. 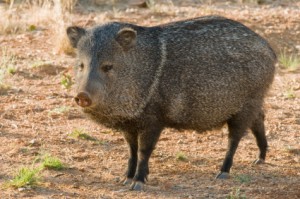 I consulted on this one with Joe Yarchin, an urban wildlife specialist with the state Game and Fish Department. He knows all about stuff like this, although as far as I know he doesn’t know who stole my bedspread off the clothesline the other day. This really honks me off. I bet it was javelinas.

Anyway, Yarchin said your best bet is a fence. You don’t need to put up a great big block fence. Try driving some wrought-iron stakes deep into the ground and maybe reinforcing them with chicken wire.

Some repellants based on red pepper might work short-term and you could try scattering around some rags that have been soaked in ammonia. It can’t smell any worse than the javelinas. Yarchin said he doesn’t like using mothballs because it just means that many more chemicals leaching into the soil.

Yarchin also said you should try to discourage them from getting comfortable. You could try spraying them with a hose, but I think they might actually like that. You can also run at them and wave your arms and shout. It’s not like they’re going to eat you or anything.

He also suggested making a shake can by sealing some pennies or small pebbles in a can and then winging it at the javelinas. It won’t really hurt them, but it might scare them off. Let me know if you do
that because it sort of sounds like fun.

While javelinas can be a smelly nuisance, they are truly one-of-a-kind. Check out some interesting facts about these odd animals.