SUPERIOR — Those who slow down as they enter Superior frequently notice an odd-looking structure on the south side of the road, right in Ally Hing’s backyard. It’s made of steel girders and reinforcing rods, has stood in the same place for almost 20 years, and resembles a giant ball with lumpy sides or an unfinished geodesic dome. It is neither. 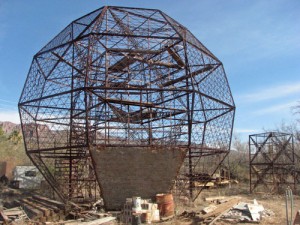 Hing says it’s a prototype for the way all new housing should be constructed. He erected the structure to illustrate the use of the basic triangle in building. It stands 20 feet high and centers on the use of tetrahedrons, which Hing says makes the finished product stronger, cheaper to heat and cool, and less expensive. He has patented the procedure and other methods of construction, but is finding limited financial support for his idealistic process.

Potential backers and the curious can see the big black open-air ball on the south side of U.S. 60 on the west edge of Superior.