Few cocktails come in as many varieties as the margarita. I thought I had seen them all (and tasted most), but Chef Josh Herbert of POSH Restaurant in Scottsdale has found another way to transform the happy hour staple while staying true to the bold flavors of Mexican cuisine. His inspiration: mole.

Mole sauce is typically characterized by chili peppers and hints of chocolate. While actual mole sauce isn’t used in the margarita, Herbert replicates the flavor combinations to create a slightly smoky, spicy and chocolaty cocktail. “This cocktail highlights our Southwest culture, using the flavors that have influenced Arizona cuisine throughout history,” Hebert said. “The flavor profile mirrors that of mole, one of the oldest sauces in the world, and also infuses chipotle, a hint of tequila, lime and smoked paprika. It’s the Southwest in a glass.” 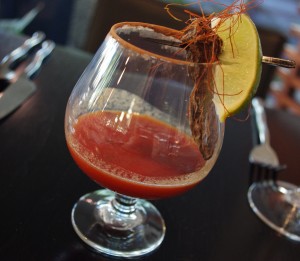 Herbert developed Mole Margarita for the Hangar One Vodka Blimp Tour. He is the only chef among nine Arizona mixologists selected to participate in the competition. The winners, one selected from each of the four regions in the U.S., will choose the next flavor of vodka to be created.

Check out the video to the right to watch Herbert in action. You can also help him out and vote for the “Mole Margarita.”

POSH Restaurant is located just north of Old Town Scottsdale in the Camelview Optima Village. It’s the first and only improvisational cuisine concept in the Greater Phoenix area. The multi-course “menu” is composed everyday and based on seasonal offerings, inspiration and the palates of each guest.

Some Southwest Food for Thought…

Chipotle, a smoke-dried jalapeno pepper, is a food staple in the Southwest. The term “chipotle” comes from the Aztecan word “chilpoktli” meaning “smoked chili pepper.” Jalapenos are actually picked at a unripe stage, when they are still green, but the longer they stay on the vine they naturally ripen and turn bright red. Eventually, as they ripen further, they will lose moisture and turn to a deep red. These are the peppers chosen to be made into chipotles. The red, ripened jalapenos are then ushered into a sealed smoking chamber, where they will remain for several days until all moisture is removed and they resemble a prune. The result is smoky flavor combined with the underlying heat of the jalapeno.

Mole (pronounced MOH-lay) is a pureed Mexican sauce. It comes in numerous varieties, yet typically known for containing chili peppers and chocolate. The term “mole” comes from the Aztec word “molli,” which means concoction or stew. It’s believed the sauce originated in the 1600s in Puebla de los Angeles, just outside of Mexico City. A nun apparently concocted the sauce to honor an archbishop who built a nearby convent.