The Dinosaurs of Holbrook

HOLBROOK — Millions of years ago, dinosaurs were common across the flatlands that now encompass this city. But they disappeared. A couple decades ago, several small-scale dinosaurs appeared along Interstate 40 near this city. But they also vanished. Holbrook, however, maintains a strong relationship with the big earth-stompers because some of them are still visible. 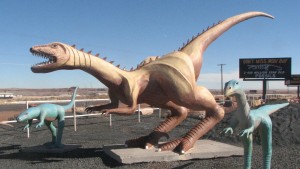 A lone cementosaur has taken up residence in the backyard of the Chamber of Commerce office at Navajo Boulevard and Buffalo Drive. It once was part of a 14-member group of frightening creatures that were placed along I-40 as advertising for a museum. When the museum closed, the dinosaurs were sold off. Eight of the originals are now located at Jim Gray’s Petrified Wood Company on the intersection of Highways 77 and 180, just south of town.