What is Valley Fever?

Excerpt from Valley 101: A Slightly Skewed Guide to Living in Arizona, a collection of Clay Thompson’s columns for The Arizona Republic. (Originally published November 21, 1999.)

Q: I have lived in the Valley for two years now and love it. A couple of weeks ago I heard about Valley fever for the first time. What exactly is it?


A: It would be nice to report that Valley fever is a disease named for our very own Valley, something we could all be proud of, but unfortunately this is not the case. It is named for the San Joaquin Valley in California.

We know this because when your question came in we went to the Internet, and with just a few keystrokes, through the miracle of cybertechnology, we were immediately connected to a Web site offering to show us pictures of teenaged nymphomaniac nurses.

Blushing deeply, we eventually found our way to the Web site of the University of Arizona’s Valley Fever Center for Excellence, which, as you would expect, is just chock-full of excellent information about Valley fever, plus some fairly disgusting full-color pictures of what it can do to various body parts, including your spleen. 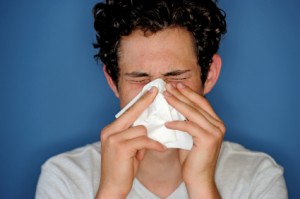 Valley fever officially is known as coccidioidomycosis. It is a lung disease caused by a fungus found in the soil of areas with low rainfall, high summer temperatures and mild winters. In other words, it is present in most of Arizona.

The experts guess that at least one-third of us have had Valley fever, which you can have without ever realizing it. About 60 percent of the people who get it either have no symptoms or just feel like they have the flu.

This is not to say it is to be taken lightly. Valley fever can bring on pneumonia, can cause painful bumps on the shins or elsewhere. It can also cause lung damage that looks like cancer on X-rays and can require surgical repair. About 1 percent of cases prove fatal.

People whose jobs involve dirt—farmers, construction workers, archaeologists — have a higher risk of infection than others, but a good dust storm can bring the fungal spores directly to you in the comfort of your own home.

Men are more likely to catch it than women, and many animals can get it, too. Dogs are especially susceptible.

One of the disease’s only redeeming values is that second infections are rare. If you do get it, you probably won’t get it again.

Excerpt from Valley 101: A Slightly Skewed Guide to Living in Arizona, a collection of Clay Thompson’s columns for The Arizona Republic. (Originally published November 21, 1999.)