Ain’t that something . . . I told mom and pop I was going to the

Rocky Mountains to trap and be a mountain man . . .

They acted like they was gut shot! Says, “Son, take your life here,

I said, “Mama Gue, them Rocky Mountains are the marrow of the

world”— and by God I was right!

1 ain ‘t never seen them, but the Andes is foot hills and the Alps are

for children to climb… and these here are God’s finest sculpturings.

Ain’t no law for the brave ones, ain’t no asylumsfor the crazy ones,

By God, I am a mountain man, and I will be here until bullet or

arrowfinds me; then I’ll leave my bones to weather white on these

The first Anglo-Americans to penetrate the wilderness regions of Arizona were that reckless breed known as Mountain Men. Prior to their arrival in the 1820s, few people east of “the Wide Missouri” were even aware of the vast, uncharted lands that would, some forty years later, be called Arizona.

The earliest written account was the narrative of James Ohio Pattie of Kentucky. Pattie’s bigger than life adventure reads like a cross between dime novel fiction and a stage play melodrama. He braved Comanche lances to rescue naked women, fought grizzlies, mountain lions, Apaches, survived a harrowing desert ordeal and vaccinated thousands from the scourge of smallpox during his five-year Southwest odyssey. 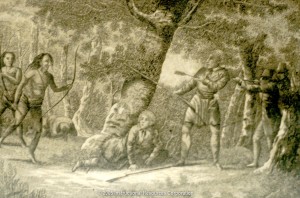 Grieving over the loss of James’ mother in 1824, he and his father Sylvestre, left the family farm in Kentucky and headed for St. Louis, where they outfitted themselves for a fur-trapping expedition. It was the heyday of the fur trade and soon they were bound for the pristine hunting grounds of New Mexico. They arrived in Taos in the fall of 1825. Taos in those days was the favorite rendezvous for American and French trapping parties in the Southwest. It was also the launching pad for expeditions into Arizona. The Gila watershed was an untapped resource of beaver pelts or “hairy bank notes” back in the days when beaver hats were the fashion and the fur trade was one of America’s greatest economic enterprises. The area was still part of the Republic of Mexico and the Mexicans weren’t eager to see the increasing number of rough-hewn, buckskin-clad Americans setting up business in Taos and Santa Fe.

The Patties were delayed in Santa Fe while trying to secure a Mexican license by Governor Antonio Narbona. The governor was reluctant and might not have granted permission had fate not intervened in a most dramatic way. A Comanche war party swooped down on Santa Fe and carried off some young women, including Governor Narbona’s beautiful daughter, Jacova. The Patties, outraged at such barbaric behavior, organized a party of trappers and went off in hot pursuit. Since the Comanches weren’t accustomed to being followed, it wasn’t hard for the rescuers to circle around and set up an ambush. The unwary war party was emerging from a narrow gap when the trappers struck. The captive women had been stripped of their clothing and were forced to walk in advance of the main group. When the shooting began, the warriors momentarily forgot about their captives and braced for battle. This gave young James and a couple of friends time to ride in and make the heroic rescue. “The gratitude of such captives,” he wrote, “so delivered, maybe imagined. Fears, thanks and exclamations in Spanish were the natural expression of feeling in such a position.” He removed his buckskin jacket and gallantly placed it on Jacova’s bare shoulders, then returned her safely to her father in Santa Fe. Needless to say, the grateful governor had a change of heart and issued the Patties and their friends a license to trapping the “Relay” or Gila country.

The remote city of Santa Fe, resting on the gentle, pinon-studded slopes at the foot of the towering Sangre de Cristo Mountains, had a population of 5,000 in 1825. The fabled Santa Fe Trail had recently opened a flourishing trade between the Mexicans and Americans and the Southwest would never be the same with the arrival of merchants, trappers and opportunists. The Mexican officials at first welcomed the interlopers, but soon began to realize the trappers would exploit the beaver-laden streams. Soon after Governor Narbona issued licenses to the Pattie party, the Mexicans toughened their laws, placing heavy restrictions on American fur trappers.

Meanwhile, the Patties and their friends were following the Rio Grande south to Socorro, then headed west to the Santa Rita del Cobre mines, (near today’s Silver City, New Mexico), before going into the rugged Gila wilderness.

After a brief rest at Santa Rita, they went up to the headwaters of the Gila and found a wealth of beaver sign. The first night out they caught thirty wily but unwary critters in their steel traps.

Next, the trappers headed north, up the San Francisco River, passing today’s Clifton. In two weeks their packs con-I; lined the pelts of 250 beaver. They had even better luck further down the Gila country. The San Pedro River was so plentiful, they named it “Beaver River.”

One morning while James was scouting the area, he chanced upon a bear’s den. Endowed with the recklessness of youth, he rigged a pine torch to the end of his rifle and foolishly entered the cave and came face to face with a huge grizzly. In the confusion of the dark, narrow confines of the cave, Pattie aimed his rifle at the shadowy figure and fired. Without waiting to see if the shot was on target, he ran towards the entrance, dropping his rifle somewhere along the way. Moments later, his courage regained, Pattie borrowed a rifle and re-entered the cave. The critter was dead and it took four men to haul the carcass out. The fat, according to Pattie, yielded ten pounds of valuable grease. A few nights earlier, he’d had a similar encounter with a mountain lion. The beast had sprung out of the darkness and landed on a log less than six feet from his bedroll. Our hero grabbed his rifle and fired point blank, killing the animal with a head shot.

In April 1826, they cached several thousand dollars worth of pelts near the San Pedro River and returned to Santa Rita while James went on to Santa Fe to get more pack animals to haul out the unexpected treasure. 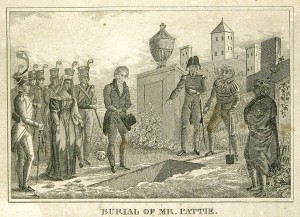 While in Santa Fe, James had another friendly meeting with the beautiful, dark-eyed Jacova where she again openly ex­pressed gratitude for his heroic rescue. But, the call of the wild got the best of him and back he went to recover the cache of furs. At the San Pedro River, Pattie’s luck ran out. The clever Apaches had located the pelts and made off with the year’s efforts.

Despite the loss, the news started a rush of trappers to the Gila country. In the fall of 1826 Pattie joined a party of French trappers led by Michel Robidoux and journeyed down the Gila to the junction of the Salt and Gila rivers (near today’s Cashion). They stopped at a village, according to Pattie, of Papagos. It’s more likely they were Yavapais or Tonto Apaches. With a grand display of hospitality, the natives invited the trappers to spend the night. All agreed, with the exception of the suspicious James Pattie, who camped some distance away. During the night, he was awakened by the sounds of violence and was soon joined by Robidoux and an unidentified Frenchman. The others were all killed by their hosts. The three survivors traveled up either the Salt or Gila and chanced upon another party of trappers led by Ewing Young.

Young, a hard-bitten mountain man of renown, took his group, along with the three survivors and returned to the site of the massacre where they trounced the natives and burned the village.

Pattie remained with Young’s outfit the rest of the season. They trapped up and down the Salt and Verde rivers, then followed the Gila to the Yuma crossing, becoming the first Americans to make the trek. Next, they went up the Colorado and past the Bill Williams Fork to the Mojave villages where a fight erupted between the natives and the trappers. The big guns of the trappers carried the day, but the cunning Mojaves stalked them along the trail. One night, a war party launched a barrage of arrows into the camp. Pattie counted 16 arrows embedded in his bedroll, but somehow he was unscathed. After losing a few men in skirmishes, the trappers split up and returned by separate paths to Santa Fe. Pattie took the scenic route—traveling by way of the North Rim of the Grand Canyon, across to the San Juan River, then overland to Taos.

Once again, bad luck plagued James Pattie. This time his furs were taken by Mexican officials who claimed, under a new policy, the bundles were illegal contraband. Undaunted, Pattie tried again in the fall of 1827. This time his father, Sylvestre, joined the expedition. They trapped the Gila all the way to the Yuma crossing where the local natives proved inhospitable and stole their horses. Assuming the Mexicans would have a port city at the mouth of the Colorado, they loaded their furs in canoes and headed downstream. At the mouth of the Colorado, they found more Indians who were not inclined to be friendly. Their last desperate hope was to turn west and try to reach the California coast. They made it to the coast and were immedi­ately arrested as trespassers and taken to jail in San Diego. Sylvestre Pattie, weak from the desert ordeal, died in his cell but dame fortune was with young James. He negotiated his release by promising to vaccinate “thousands” of locals from smallpox.

In mid-1830, an older and wiser James Ohio Pattie re­turned to his old Kentucky home. Discouraged, weary and broke, he lamented, “the freshness, the visions, the hopes of my youthful days are all vanished, and can never return.”

Pattie didn’t keep a journal on his Arizona adventure but told his story to Timothy Flint, who edited it for publication.

It was customary for the buckskin men to stretch their tales a bit and Pattie was no exception. However, there was basis for fact in much of what he recalled and his journal provides an important piece of history of the fur trade in Arizona.